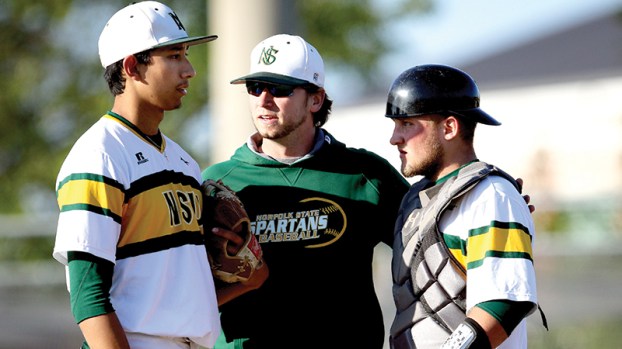 NSA’s baseball team will have a new guy at the helm after the recent departure of David Mitchell. Mitchell went on to take the head coaching job at Paul D. Camp Community College. After a solid coaching search, NSA has decided Seal is the best fit for the job.

Seal has spent the last eight years at NSU as the pitching coach and associate head coach. He is also a former player there.

As a player, Seal competed for NSU from 2005-2008 and achieved many records. He is the all-time leader in innings pitched, strikeouts and appearances. As a coach, he oversaw a pitching staff that steadily improved. During the last two years, NSU’s pitching staff had been considered among the best in the MEAC Conference.

“I’m excited to join this new family,” Seal said. “I’m grateful for everything NSU has done for me. I owed NSU the world, but I’m super excited about what’s ahead.”

The new Saints coach is excited to embark on a new journey as a first-time head coach. Before he got an offer, he discussed everything with family and friends, and they felt the opportunity was good for him.

“I love it man; my wife and our 3-year-old daughter are fired up,” he said. “We are excited to start this new journey, and it’s one I’m super excited about it. I’m able to still impact the lives of young men on a greater scale. It’s a dream job for me.”

Seal is excited for the opportunity to be able to implement a new culture. He gives credit to Mitchell for the job he did in previous years as NSA’s coach.

Seal doesn’t believe he is stepping to a situation that calls for a complete culture rebuild. However, Seal is excited for the opportunity to be able to develop players and build bonds with them.

“With the way I coach, I want to make sure every single thing you do, you do with intention on being a little better today,” he said. “The biggest expectation I have for anyone who’s played for me was just to be better today than you were yesterday. The results will always take care of themselves.”

NSA lost only two seniors from last year’s team. Seal is excited about the talent that will be returning and feels confident in what the team can accomplish. The new Saints coach was familiar with some of the players prior to accepting the job. He had been recruiting a couple of players on the team.

“I already know some of these kids on a different level, and that had a lot to do with my decision,” Seal said. “I knew what kind of kids I was coming in to coach.”

Seal is most looking forward to the relationships he will be building. He prides himself as a coach who builds relationships with players for a lifetime. The long-time NSU coach has had an opportunity to be a best man in a former player’s wedding and has gone to hospitals to visit former players and their newborns.

It is a result of the relationships Seal has formed with his players.

“When you have a coach that really impacts you, it’s an emotional thing,” Seal said. “When you form those strong bonds, your players will do anything for you and vice versa.”

NSA was defeated in the quarterfinals of Virginia Independent Schools Athletic Association’s Division II state tournament in May.

Nansemond River High School senior Gage Williams has committed to play college baseball at Longwood University. It has been an... read more