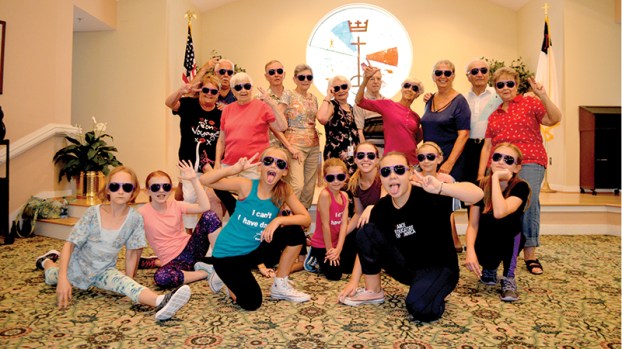 Allonge Dance Academy students pose for a picture with the Lake Prince Woods Retirement Community residents at the end of the National Day of Dance activities on Saturday.

The annual celebration was founded in 2010 by Nigel Lythgoe, co-founder of the Dizzy Feet Foundation, which provides grants for dance programs that serve low-income populations and institutions.

“It’s a day where everyone can come together over loving to dance,” Short said. “It’s not about dancing well. It’s about simply loving music and movement.” 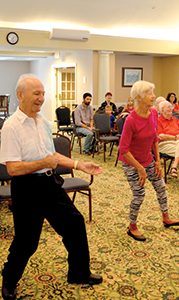 The dance students guided about two dozen residents in a simplified, adaptive version of the official National Dance Day routine “Shake, Wiggle, Move” by musical group District 78. Ranging from ages 7 to 17, the girls instructed the senior residents to pump their hands, bob their heads, shrug their shoulders and lift their knees to the rhythm of the music.

“I never had the opportunity to teach,” said 17-year-old dance student Anna Grace Towler. “Teaching in general was something new for me, but I really enjoyed it.”

While some of the residents remained seated in their chairs, others were excited to slide their feet and act like a puppet on a string.

“We love to see who can get funky with it,” Short quipped.

Resident Walter Hammerle was the captain of a team of residents and dance instructors in a friendly dance battle that was met with raucous applause from the audience in front of the stage.

“It was great fun, these little dancers with us old timers,” he said. “It was a happy group.”

Vivian Simpson agreed that the young instructors were wonderful and was impressed by the quick and energizing calisthenics of some of the trickier moves in the routine.

“It was a good workout for sure.”

Some of the young instructors were impressed themselves by the energy and enthusiasm the seniors brought on Saturday.

“They were so energetic and they caught on really fast, and that made it really fun,” said 13-year-old dance student Molly Brennan.

Video of the group’s dancing was posted on YouTube with the “Allongenationaldanceday2017” hashtag, one of many posted as part of the celebration. The Dizzy Feet Foundation will grant two dancers from the video with the most votes a private dance class in Los Angeles, Calif., with actress and dancer Jade Cynoweth.

“They’re not just looking for the best dancers,” Short said. “They’re looking for people who come together and just give it their all.”

While the two winners of that grand prize remain undecided, Lake Prince Woods residents simply enjoyed the opportunity to have fun dancing and laughing with their friends.

“We like to laugh a lot,” said resident Jean Hoyniak. “What keeps us going here is our laughter.”

The Suffolk Foundation has announced that there are two winners of $5,000 Howard D. Mast Memorial Scholarships this year —... read more