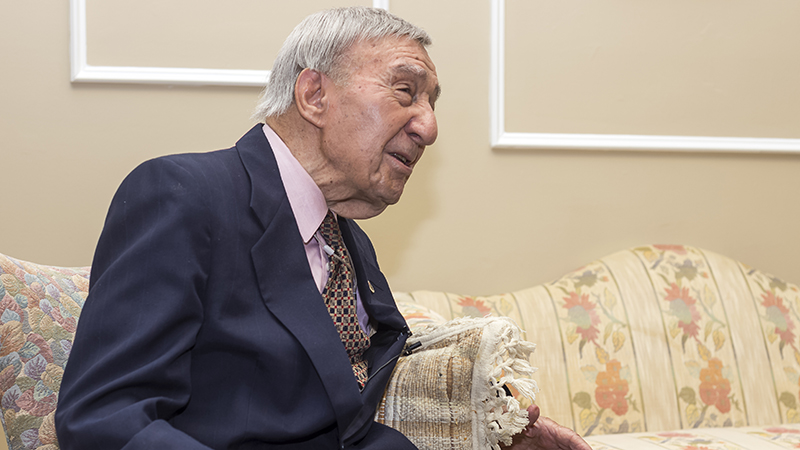 Suffolk lost a legend, a cheerleader and a beloved storyteller on Saturday, as former Mayor Andy Damiani died at Sentara Obici Hospital.

Damiani’s nephew, Jimmy Daman, confirmed Saturday evening that his uncle had succumbed after having been taken to the hospital with a medical problem.

“Andy was 95 years old,” Daman said. “His health was deteriorating, and we were fortunate to get Andy to Obici Hospital. He passed fairly quickly. I was there with him the whole time, and he did not suffer at all.”

“I was very thankful that I had those last few moments with my uncle,” he added. 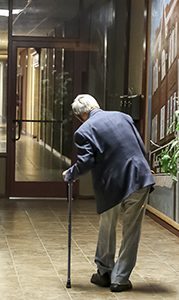 Damiani walks back into his Washington Square Mall following the downtown Christmas parade in 2015. Damiani died Saturday at the age of 95.

Damiani is survived by a brother, Anthony Daman, and eight nieces and nephews, including Jimmy Daman. Funeral arrangements are pending, according to Daman.

But he never stopped campaigning for the city, even long after he had left politics.

Born in Richmond in 1921, he moved to New York as a teenager to audition at Julliard School of Music and was paying his tuition there with odd jobs in Manhattan and the Catskills when the war came calling

He served in the Army during Word War II, having been drafted out of Julliard in 1942, according to an account in the book “Damiani Here! The Adventures of Andy Damiani,” a work he commissioned in 2014 from local author Phyllis Speidell and photographer John H. Sheally II.

In a series of excerpts from that book, published in the January/February 2016 edition of Suffolk Living magazine, Speidell and Sheally, who became close friends with Damiani while researching the book, wrote that Damiani was shipped out with the 100th Infantry in 1944. He was an infantry soldier and a squad leader in the headquarters band, playing both E-flat horn and bass.

After fighting across France and to the town of Bitche, the men of the 100th were able to retake the town from the Nazis after three months of fighting, earning themselves the moniker, “Sons of Bitche.” Damiani told his biographers that the general ordered his band to play as Allied troops marched into town.

From the Suffolk Living account: “There I was in a dirt courtyard, one foot in a pile of manure, a carbine at my side and my horn in my hands, but I don’t know that I ever played a note that day. I was too busy watching for German snipers on the rooftops,” Damiani said.

Damiani was a storyteller of great significance.

“Andy has always been somebody that could tell wonderful, exciting stories,” Daman said. “When we would have family gatherings, he would certainly share with us experiences he had in his life, and we were all very excited to hear about it. I remember some of his war stories, some of his stories of New York and what it was like growing up in Richmond.”

But, Daman noted, it was his uncle’s interest in others that likely endeared him to so many people of so many different stations.

“He had a great curiosity about people, and that said a whole lot about how he cared for people. Andy shared many lives, and mine was one of them.”

Nobody has been quite so well identified with downtown Suffolk as Damiani. In fact, his love for the city’s historic core earned him the name Mr. Downtown, a name he carried so proudly that it was a chapter heading in his biography.

His nephew, who grew up in Norfolk and now lives in Harbour View, joked that his uncle must have had mixed feelings when he moved to North Suffolk.

“I moved from Norfolk to Suffolk, so that was a good thing,” he said. “But I just didn’t quite make it to downtown. Andy recognized North Suffolk as really a feather in the cap of Suffolk, so I think he cut me some slack.”

Despite moving to the Nansemond Pointe assisted living facility within the last year, Damiani maintained a loft apartment and offices in the Washington Square Mall, where he opened an art gallery devoted to Suffolk artists and artwork in 2016.

“It’s not only a loss for our family, but for our city, too,” Daman said. “I think he was well-respected and certainly had a love for the city of Suffolk like no other person I ever met.”

“What he really wanted was for people to know that he never left downtown,” Speidell said of a conversation she had with him during lunch with him and Sheally on Thursday. “That’s where his heart was.”

In fact, his move to Nansemond Pointe was a hard one for Damiani, who always seemed to take strength from his daily walks along the sidewalks of West Washington and North Main streets.

His loft apartment was located up a steep set of stairs, and emergency crews responded to the location more than once when he reached the top and was winded during his 90s. Friends worried that he might fall — he had become more and more dependent on his cane, and a sideways stoop had become severe in his later years.

Soon after moving into the assisted living facility, he confided in a reporter that he intended to move back to the loft. That move, however, was not meant to be.

“You can’t quite imagine downtown Suffolk without him,” Mayor Linda Johnson said Saturday night. “He never, ever wanted to say no to a business coming to Suffolk. That’s how we’ll remember him; he was always promoting the city. He always continued being the cheerleader for the city.”

Johnson recalled that Damiani had met with her soon after she became the mayor and that he offered her advice on what she should do.

“He was never shy to tell me what he thought I needed to be doing,” she said. “But he was always kind and gentle. He gave his heart to our city. That heartbeat will be felt in our city for a long, long time.”

In May, Damiani was honored by the Salvation Army of Suffolk as a life member of its advisory board.

Even he couldn’t recall how long he’d been a member of that board — records from the organization showed it had been longer than 30 years — but his work with the Salvation Army had been vital to its success in Suffolk.

Damiani recalled giving the Salvation Army a rent-free space he owned at 109 Pinner St. for its thrift store many decades ago.

Capt. Shauntrice Anthony recalled that when she and her husband, Johnny, arrived in Suffolk two years ago, Damiani was one of the first people to welcome them to town.

“When we first got here, one of the first things I was told was, ‘If you know anybody, you need to know Mr. Damiani,” Anthony said during the ceremony to honor him.

There’s a good chance that Damiani’s original connection to the Salvation Army is revealed in one of the thousands of newspaper clippings he kept through the years.

He kept the collection in a series of metal filing cabinets and boxes in his loft apartment and office, where he moved several years after his wife Mary died. In 2015, he donated the collection, along with other memorabilia, to the Historical Society of Virginia in Richmond.

His hope was always that the city he loved so well would benefit from his work and from his memories.

“In Suffolk, I floated around a lot of ideas,” he told his biographers. “Some stuck.”