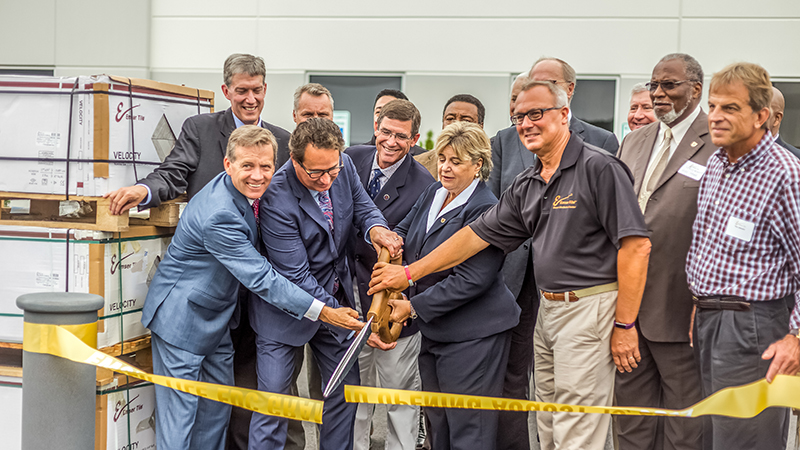 City, state and company officials — including Mayor Linda Johnson and company vice president Mark Seal — cut the ribbon on Tuesday to mark the official opening of the Emser Tile warehousing and distribution center in the CenterPoint Intermodal Center.

Saying he hoped the facility would mark “the beginning of a long, fruitful relationship,” Virginia Secretary of Commerce and Trade Todd Haymore officially welcomed Emser Tile to Suffolk on Tuesday.

“You guys are on a roll,” Haymore told Suffolk officials during a ribbon-cutting ceremony, noting recent economic development commitments to the city by Peet’s Coffee and others.

What nearly all of those recent announcements have had in common is a connection to the Port of Virginia, whose facilities ship goods to and from the warehouse and distribution centers that are springing up around Suffolk.

Emser Tile Vice President of Supply Chain Mark Seal made the connection explicit during his own remarks at the event.

“The Port of Virginia has been a key partner in the Emser supply chain,” he said.

The company’s newest warehousing and distribution center began stocking tile and stone in April, Seal said later. The Suffolk facility serves the company’s East Coast market, from Boston to Florida, and it gets the company closer to the European market, he added.

Delegate Chris Jones (R-76th), a Suffolk native and a staunch supporter of the ports, said Virginia’s recent commitment of hundreds of millions of dollars to improve port access and facilities was part of what attracted Emser to the commonwealth.

“We’re getting ready to dredge (the harbor) to 55 feet, and I think that had a lot to do with the decision to come here,” he said.

“You can see the momentum building in Suffolk,” said John F. Reinhart, chief executive officer and executive director of the Virginia Port Authority.

Tony Beck, senior vice president at CenterPoint Properties, the company that is developing the “mega-site” on which Emser built its $16-million facility, said he can see the evidence of that momentum from his Norfolk office.

“Every day, I see bigger and more ships coming into port,” he said.

And CenterPoint’s Suffolk development off Kenyon Road and Route 58 — which hosts distribution centers for Ace Hardware, Nexcom and Friant and Associates, in addition to the 400,000-square-foot new Emser building — is fast becoming an example others want to follow, Haymore said after the ceremony was concluded.

“This is viewed around other parts of the state as what happens when you put together a mega-site and market it around the country,” he said.

Seal, the Emser corporate officer on hand for the opening, thanked Suffolk and Virginia officials for being so helpful during the planning and construction process.

At the time of the February 2016 announcement of Emser’s intent to open a Suffolk facility, the administration of Gov. Terry McAuliffe revealed it had promised a $250,000 grant from the Commonwealth’s Opportunity Fund to help with the project.

The company will also benefit from the Port of Virginia Economic and Infrastructure Development Zone Grant Program, according to a release from the governor’s office at the time. The Virginia Jobs Investment Program will provide funding and services associated with employee training.

“They’ve been great partners, a great community of partners,” Seal said of state and local economic development officials. “The state and city really walk their talk.”

“None of this just happened,” Mayor Linda Johnson said during the ceremony. “It takes all of us working together. We will always be your partner.”