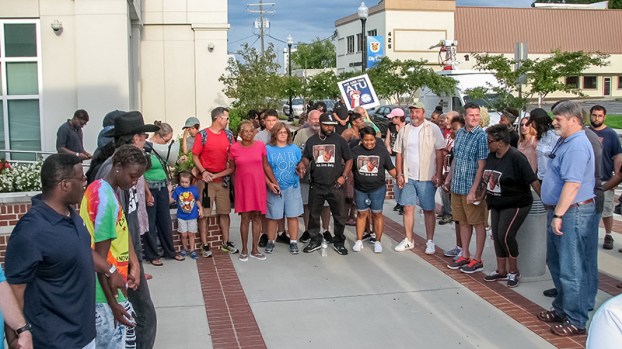 A diverse crowd of about 80 people turned out for a peace rally in front of City Hall on Saturday evening. Jen Jaqua/Suffolk News-Herald

A peace rally on Saturday evening did not include a march through downtown as planned but still attracted a large, diverse, peaceful crowd who came together and spoke of love.

Imari Griffin, 25, planned the event following last weekend’s deadly violence in Charlottesville, where a Suffolk native, Deandre Harris, was injured. She announced Saturday morning that it had been canceled for safety concerns and declined to elaborate.

But about 80 people, Griffin included, showed up in front of City Hall anyway, where the march was set to begin. Black and white, young and old, men and women, all listened as local pastors and community organizers spoke of the love of Christ. 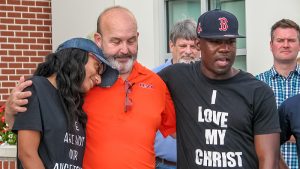 Attendees were asked to grasp hands with someone of a different race during prayer, hug them and introduce themselves.

Several speakers urged those present to make loving others an action and not just an idea.

One of the most powerful moments of the gathering came with Epps invited Ron Hatfield, a local white man who had disagreed with Griffin on social media about the worthiness of the event, to the front, where the three embraced.

“I bless God that Ron came out here,” Epps said. “These two had the ability to love on each other. God can turn a bad situation into something great.”

Pastor Aaron Burgess of Suffolk Church of God encouraged listeners not to let the love end on Saturday.

“Allow this moment to become the momentum to a movement,” he said. “We do not have to agree with each other to still respect each other.”

The group’s meeting happened under the watchful eyes of more than a dozen Suffolk police officers, including Chief Thomas Bennett. The officers brought a cooler filled with ice and bottled water for the attendees. Griffin applauded the department’s efforts to help keep the gathering safe.

Harris’ parents, who were in attendance at the event, accepted many well wishes from others.

“I appreciate all the love and support given,” said his mother, Felicia Harris.

Griffin said she was sorry she had to cancel the march but excited about how the event turned out in the end.

“If there was a chance one person could get hurt, I didn’t want them to get hurt,” she said. “I’m excited. I’m happy that everyone came out and we did it in a peaceful way.

“God created us all as one,” Griffin added. “He doesn’t see color. It really warms my heart a whole lot to see all of this support.”

A local church will hold its eighth annual Shoebox Ride this Saturday to raise money and support for Operation Christmas... read more