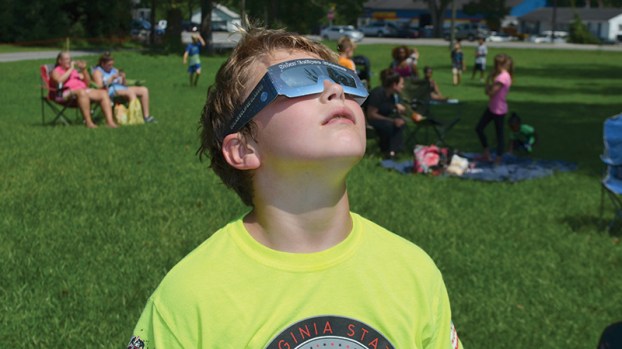 Declan Wall, 9, is stunned by the partial eclipse. He was one of many children that witnessed their first such event at the Chuckatuck Library on Monday.

The eclipse on Monday brought Suffolk outside to get a look at a sight seldom seen. For Jennifer Spencer and her family, the occasion brought them to a pool.

Spencer went to Nansemond Swim Club in the Eclipse community with her husband Matt and their daughters, Cassidy and Campbell. The Governor’s Pointe residents enjoyed the hot afternoon in the water as the eclipse began at about 1:20 p.m.

Then they put on solar eclipse sunglasses and enjoyed the view.

“It looks really cool,” 12-year-old Cassidy said, “like a ball with a little cut-out on the side.” 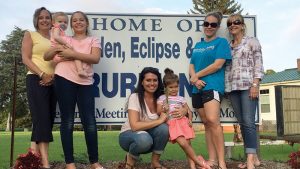 A handful of residents of Eclipse, a village in North Suffolk, wait on the eclipse in front of the Eclipse sign on Monday. From left are Terrie Riddick, Jadyn Gray (holding Baylee Jordan) Jennie Gray, Bella Jordan, Heather Jordan and Sherri Matthews. (Submitted Photo)

Spencer recalled the first eclipse she saw when she was about the same age as her daughters in 1984. She had spent that day at school turning cardboard boxes into eclipse viewers.

She was excited to bring her daughters to their first eclipse with eclipse sunglasses from Jefferson Lab in Newport News.

“I was super excited, ‘cause I knew they were legit,” she said.

Suffolk was in the path of about 86 to 87 percent obscuration for the eclipse, with a gradual change towards maximum eclipse at approximately 2:46 p.m.

Suffolk Public Library had prepared Chuckatuck library for a “Total Eclipse of the Sun Party.” Staff offered 300 free eclipse sunglasses courtesy of the Space Science Institute in Boulder, Colo. According to youth and family services manager Jennifer Brown, folks started to form a line for sunglasses at 9 a.m. 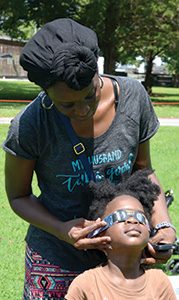 Sherry Wilson makes sure her daughter Rayna, 4, has her solar eclipse sunglasses ready during the “Total Eclipse of the Sun Party” at Chuckatuck Library on Monday.

Some simply looked up at the sky motionless and enjoyed their first eclipse.

“I think it looks a little bit like Pacman being eaten by his own mouth,” Rainor Vigneault said about the partial eclipse.

John Murray, a Driver resident, and his wife, June, took in the eclipse, but it was not the first for John.

He recalled the total eclipse he experienced in 1970 at the Virginia Beach oceanfront. He described how the sky went so dark in the afternoon that lights from street lamps, passing cars and buildings shined bright.

He both felt and heard the temperature drop on the beach.

The partial eclipse on Monday may not have been as dramatic, but for first-timers like 12-year-old Simone Wilson, the sight was still a marvel.

Rodney Wilson was there with his daughters Simone and Rayna, his son Samuel and his wife, Sherry. Their children looked up in amazement with their eclipse sunglasses at what could be the first of several such sights in their lifetimes.

‘Best two minutes of my life’

For some folks from Suffolk, the partial eclipse viewable from the city limits just wasn’t enough to cut it. Several... read more