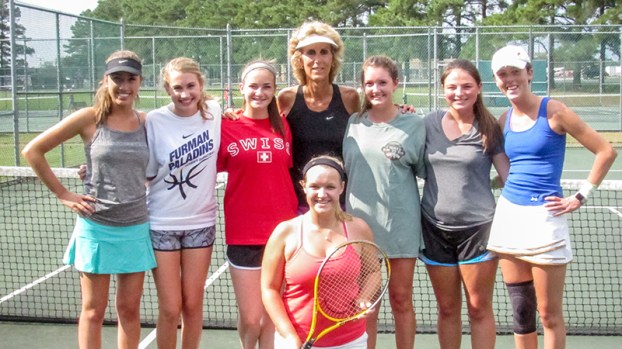 Nansemond-Suffolk Academy girls’ tennis Coach Sheryl Raulston is always excited about this time of the year. She enjoys being able to teach young women the game and coaching them to victory.

The Lady Saints tennis team will lose six seniors but still expects to be competitive this year.

Last season, the Nansemond-Suffolk Academy girls’ tennis team went 10-6. They had a productive year that saw the loss of their top two singles and doubles players. Lady Saints coach Sheryl Raulston will be returning a young team this season, so 2017 can be looked at as a rebuilding year as Raulston seeks out her top talent for the year.

“It’s a good group of girls,” Raulston said. “They are working really hard at practice. I think it is going to be a lot of fun this year.”

A lot of the team this year consists of eighth-graders. Raulston knows that there is talent on the team and is excited to see how the Lady Saints do against other competition. This time of the year is always a special one for Raulston. She gets to teach her players the game of tennis and watch them apply to matches with their own style.

“I love it, I love the girls and the school,” Raulston said. “It is a great job for me to be able to coach tennis and give back. I like seeing them develop as players, and we have a lot of fun together.”

Right now, NSA is still going through its challenge matches so Raulston can figure out who her top five players will be. Frances Hogg is the top returner for this season. Last year, she was the No. 5 player for NSA.

The TCIS will again feature some of the best girls’ tennis teams in the state. Raulston knows NSA can always get good competition from TCIS teams. She expects NSA to do well against those teams while also seeing how the year progresses.

NSA will have its first match against Hampton Roads Academy at home on Aug. 29.