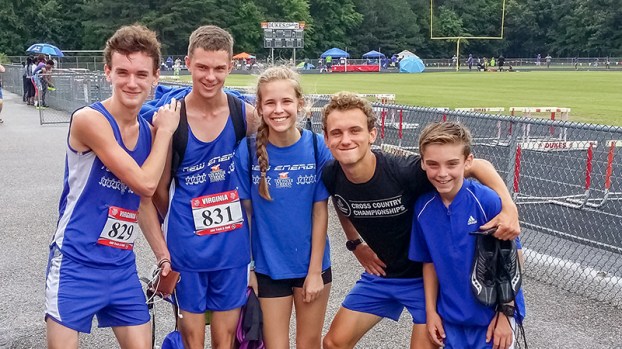 Children interested in running with purpose will have an opportunity next month to join a team that encourages runners of all kinds.

Suffolk New Energy Youth Running Club will begin fall training on Sept. 7 at Sleepy Hole Park. The club will meet at the same location Mondays and Thursdays at 5:30 p.m. until the week before Thanksgiving.

Tidewaters Striders’ New Energy is a group of roughly 250 boys and girls ages 6 to 16 with recreational, health and competitive motivations for running. The Suffolk club was founded in 2010 with six runners and has since grown to more than 50 runners annually, according to coach Steve Sheppard.

The trick has been keeping the practices exciting and consistent.

“The secret sauce is having a fun practice, encouraging each other, working hard and having that stability,” he said.

Runners follow structured workouts at each one-hour session based on their individual ages and respective skills. Sheppard said his runners range from beginners that want to embrace healthier lifestyles to competitors training for track and field, cross country and road races.

“I try to encourage a collaborative, helping mindset of each group helping each other meet their goals,” Sheppard said.

Sheppard and his team of certified assistant coaches split their runners into groups stationed around Sleepy Hole Park. Younger members can practice at the playground, while others run on looped routes suited for half-mile sprints. The 66-acre park offers plenty of trail-running opportunities and wide-open fields for relay training, according to Sheppard.

The park is also less than a 35-minute drive away from Hampton, Chesapeake, Portsmouth and Norfolk, and along with being a convenient location, parents feel safer for their children because of relatively little traffic on the grounds.

“It’s got a lot of area, and you don’t have to worry about traffic,” Sheppard said.

It’s up to each member how far he or she goes in the club. If any want to invest more effort and compete, then they can challenge other clubs in Hampton Roads in the Youth Grand Prix one-mile races.

“If you want to come out and get in shape, that’s great, and if you want to get more competitive, you can take part in Youth Grand Prix,” Sheppard said. “There are levels of involvement available depending on how interested they are.”

Membership costs $12 per year or $18 for two years, with discounts for families with multiple members. Call 676-9696 or email newenergysuffolk@gmail.com for more information.

Charges against lawmaker in jeopardy

Attorneys for both sides of the case against state lawmaker Richard Morris said Tuesday they expect the charges to be... read more