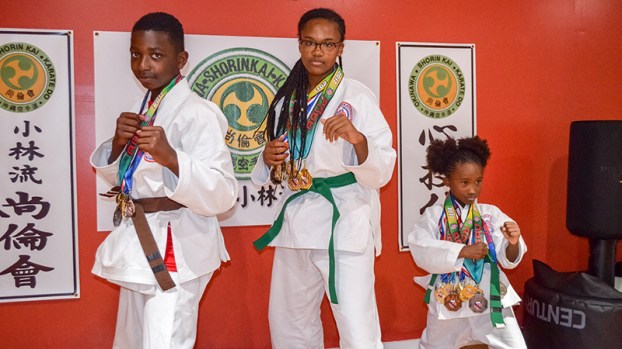 Wearing competition medals they won this year, including the Amateur Athletic Union Karate National Championships from June 27 to July 1, these students of the Dojo Mount Everest Karate Studio on Eclipse Drive in Suffolk are poised and ready. From left, Treshaun Whittaker, 12, Teress Dobie, 14, and Alaina Spears, 8.

The competition drew more than 1,600 martial artists from across the country. Teress Dobie, Treshaun Whittaker and Alaina Spears competed on behalf of the Dojo in their first national AAU competition.

Teress, a 14-year-old with five years of training, earned three medals. One was a bronze medal in kata — Japanese for “form” — which required choreographed movements judged for execution. She then went on to win gold medals in weapons and sparring competitions.

She said she was proud of her achievements as a black girl her age.

“It’s really exciting,” she said. “At my age and my gender and my race, it’s kind of hard to get to where I did. Making that accomplishment was a dream come true.”

Her final match for the national title led to a tie with her opponent. AAU scoring awarded one point for kicks to the head and grapple takedowns and a half point for strikes to the body. She needed one full point in front of an audience that surrounded the arena to win.

Rivas said he trained his students to maximize their points by practicing kicks. The Dojo even raised money for competition expenses this year by practicing 1,600 front kicks — one for each dollar — on a single Saturday morning in April.

Teress won her medal with a controlled kick to her opponent’s head. Rivas said that after the match, one of the members of that opposing team approached Teress to tell her “you are a warrior.”

“It was beautiful,” Rivas said.

Her 8-year-old sister, Alaina, won a bronze medal in sparring herself, as well as bronze in kata. Alaina has been training with Rivas for three years. She said one of her idols was Rika Usami, a renowned Japanese karate champion, and has watched lots of her videos on YouTube.

“Her kata is very clean and amazing,” she said.

Treshaun, who has been training with Rivas for six years, earned a bronze medal in sparring. He and his teammates spent 10 hours in training weekly, including sessions on weekends, since January to prepare for competitions.

The 12-year-old explained that the sacrifices he made to keep up with training were simply motivated by his dream of going to the Olympics when he gets older.

Rivas opened The Dojo on Eclipse Drive in January after teaching the Suffolk Parks and Recreation “Karate 4 Kidz” program for eight years. His student roster includes former members of that program.

He said each child is different, but the goal is the same: build their confidence and discipline, and help them find their strength.

“The challenge that I like is having a beginner and seeing how they develop,” he said. “It’s nice to see them struggle, then see them find that strength to excel in karate. It’s a really wonderful gift.”

A Windsor woman was arrested Wednesday evening after she got in a crash in the 100 block of East Constance... read more