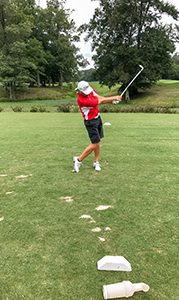 The Warriors continue their early winning streak. In a non-district matchup against Churchland High School at Sleepy Hole Golf Course, the Warriors defeated them. Out of six matches the Warriors have played, Lyons has been the medalist in three of them.

Wednesday’s score was Lyons’ lowest of the season and a new career high. In each of the times he has medaled, he has shot a career high.