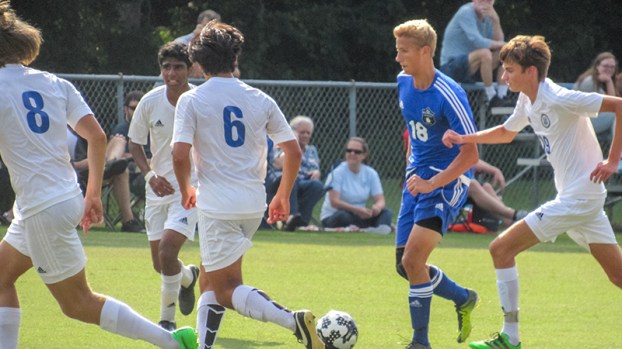 Nansemond-Suffolk Academy defenders try to force a turnover on Atlantic Shores. The Saints were down 4-1 before coming back and winning the game 6-4.

The Saints boys’ soccer team came back from being down three goals at halftime to get their first win of the season Thursday at home.

The Saints had a remarkable second half, scoring five unanswered goals. Owen Firnstahl had a big game for the Saints, going for a hat-trick along with leading the team in assists with two. After the game, Firnstahl said being down three goals was never a true worry for him. Once NSA started scoring in the second half, he knew they were going to be unstoppable.

Saints coach Patrick Whelan was ecstatic with the way his team continued to compete hard and fight back through some adverse moments.

“That game showed our team’s never-say-die attitude,” Whelan said. “Going down 1-4 could easily have been demoralizing, and many teams would have thrown in the towel, but our boys kept fighting. With every goal we scored, we grew in confidence, and I don’t think a single player on that pitch doubted what the final outcome of the game would be.”

It was a good start for the Saints and Whelan, who hopes his team can carry this attitude with it throughout the rest of the season. The TCIS and Hampton Roads area is filled with talented soccer teams, and Whelan expects his guys to compete at a high level in each game.

NSA returns a lot of experience and doesn’t lack for leadership, as they have nine seniors on their team this year. Senior captains Evan Sciacchitano and Firnstahl are expected to have huge years leading the team defensively and offensively. Christian Berner is another player who is projected to make contributions at the midfielder position. Players like Parker Bono, Aidan Watts and Luke Jackson are all talented on and off the ball. Bono added two goals in the game on Thursday.

NSA will take on Hampton Roads Academy at home at 4:30 p.m. Tuesday.

The Lakeland High School girls’ volleyball team is coming into the 2017 season wanting to be better than in 2016.... read more