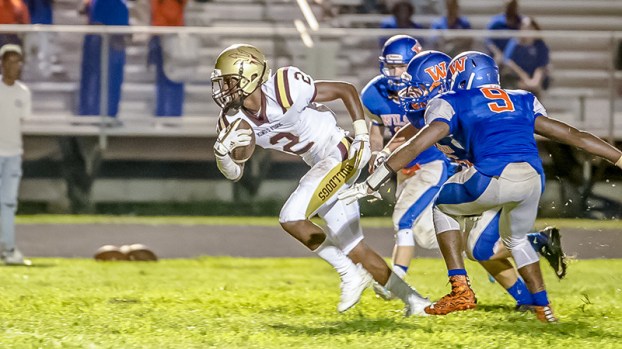 Sam Dunn runs the ball during Friday’s season opener against Wilson High School. The Bulldogs shut out the Presidents, scoring 41 points on their way to the lopsided win. Danny Haymond Photo

The King’s Fork High School football team went on the road to take a 41-0 victory in their season opener.

The night was filled with explosive plays for the offense and daunting stops for the King’s Fork defense. King’s Fork made a statement Friday night by not allowing Wilson High School to score a single touchdown on their home field. It was the Bulldogs’ first shutout since the 2015 season.

It all started on the first play of the game for King’s Fork. A 61-yard touchdown run was called back due to a penalty. However, the Bulldogs did not let that slow them down. They followed up the nullified touchdown with a solid drive that was capped by a touchdown catch by Dennis Whitehead.

Quarterback Justin German touched the field officially for the first time since his knee injury in 2016. He threw for 180 yards and three touchdowns. Cherrod Joe, Kassim Rawlings and Sam Dunn were all recipients of German’s touchdowns. After the game, German said it felt like “heaven” to be able to be back out there with his teammates.

“He is getting back into a rhythm,” Bulldogs coach Scottie Littles said. “In preseason scrimmages, we protected him well. This was his first game back from his ACL injury. He got hit and shook some rust off.”

Darran Butts finished the game with 130 yards rushing and two touchdowns. That could have very well been close to 200 yards had the 61-yard run counted. In the middle of the second quarter, Butts broke off the game’s longest play as he shot up the field for an 81-yard touchdown run. At the top of the third quarter, Wilson botched a punt that the Bulldogs recovered at the one-yard line. That drive set up Butts’ second touchdown.

Wilson looked to be overmatched by King’s Fork the whole game. However, Littles liked how gracious his team was in victory.

“We are never taking winning for granted,” Littles said. “We are humbled we are able to get the victory and play well. We are going to take things we didn’t do well and coach them up so that we won’t have those issues anymore.”

There are some things Littles wants to get corrected before the Bulldogs take on Western Branch High School next weekend. One of those things was the pitch and catch between the quarterback and running back.

“Those little things on the offense will come with time,” Littles said. “I like where we are right now. We are just going to keep improving on our execution on both ends.”

King’s Fork will have a bye next week before their home opener against Western Branch on Sept. 8.

Bulldogs take each day to be better

Coach Rick Hite is making sure he and the King’s Fork High School boys’ volleyball team are taking each day... read more