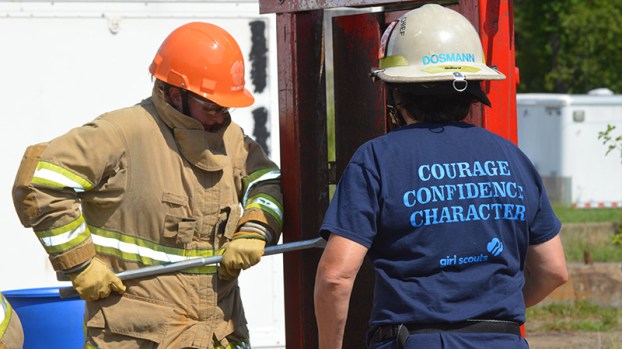 With stormy weather threatening their scheduled activities for Monday afternoon, the Girl Scouts made some adjustments and headed to Norfolk International Airport, where they watched an airport fire training demonstration and learned about the airport’s unique fire department and equipment. Later in the week, the girls had the opportunity to put firefighting skills to the test at the Southside Regional Fire Training Academy in Portsmouth, where they climbed an aerial ladder on a firetruck, learned forcible entry skills using a Halligan bar, took part in confined space training and operated hose lines. For many of the girls at Camp Fury, the highlight of the week was rappelling inside Chrysler Hall in Norfolk.

Amber Harris, who will be a senior at Western Branch High School next year, attended Camp Fury Chesapeake for the second year. Inspired by her first experience with the camp, Amber took an emergency medical technician training class during the school year.

“I thought that the class would be complicated, but it wasn’t, especially because I had gone to Camp Fury,” Amber said. “I am now planning to pursue a career as a firefighter.”

In addition to the firefighting experiences they had during the week, the girls learned about other nontraditional careers for women and met women who work in those fields. A panel of female scientists and engineers from NASA spoke to the girls about their experiences in the field of aeronautical engineering. They also welcomed guest speakers from the Chesapeake Sheriff’s Office and a female commanding officer in the U.S. Navy. During the week, the girls also toured the emergency department at Chesapeake Regional Medical Center and learned defensive tactics with the Chesapeake Police Department.

This is the second year that Girl Scouts of the Colonial Coast and the Chesapeake Fire Department have partnered to host Camp Fury. The concept of Camp Fury originated in Arizona, and Chesapeake Firefighter Paramedic Mandy George brought the camp to Chesapeake after volunteering at Camp Fury Hampton for a couple of years.

Girl Scouts of the Colonial Coast serves nearly 10,000 girls in kindergarten through 12th grades with the help of nearly 5,000 adult volunteers in southeastern Virginia and northeastern North Carolina. To volunteer, reconnect, donate or join, visit www.gsccc.org or call 1-800-77SCOUT.