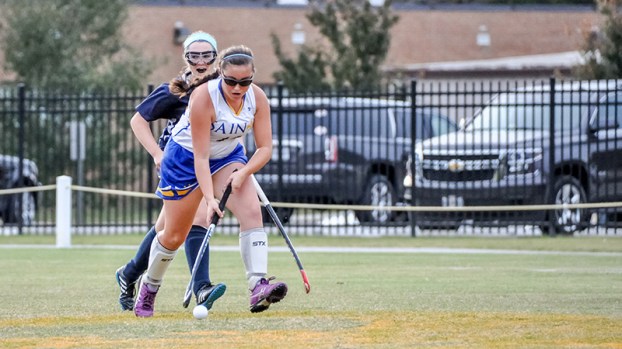 Lauren Meyers had a goal and an assist for the Lady Saints in their season-opener win. Lisa Meyers photo

The Lady Saints field hockey team got its first win of the season at home against Norfolk Collegiate Friday.

Coach Shelby Bourn got her first win as a head coach, as the Lady Saints defeated Norfolk Collegiate 2-1. Nansemond-Suffolk Academy opens up the season 1-0. Bourn said it felt good to get her first win of the year.

“It was nice to get the first win at home,” she said. “The girls played pretty good overall. Everything went a lot better than it did in the scrimmages. So, it was pretty fun.”

NSA got off to a 1-0 lead early with a goal by Kirtley Arnold before Norfolk Collegiate scored their only goal of the game later on. Lauren Meyers scored the final goal for the Lady Saints to give them the win.

“Everyone played a good 60 minutes of hockey,” Bourn said. “Their energy level was high, and they played well.”

Bourn said she imagined her first game as a head coach to be close. Prior to the game, she didn’t know much about Norfolk Collegiate. Though NSA got the win, she still believes there are a couple of things for the Lady Saints to improve on. Recovering on defense is one thing the Lady Saints will get cleaned up.

NSA will make a quick turnaround and will play Hampton Roads Academy on the road at 4:30 p.m. Tuesday.

The sun shone, darkened partially and shone again in Suffolk last Monday, and plenty of folks did the responsible thing... read more