On Aug. 5, Lataisia Jones earned her doctoral degree. Her family was thrilled. Her sister posted a graduation photo on Facebook. Sounds pretty routine. Except for one thing: Her sister’s Facebook post was “liked” or shared more than 6,000 times, and Jones is getting requests for advice from students around the globe.

Why? Jones, a 2006 King’s Fork High School graduate, was the first black Doctor of Philosophy graduate in biomedical sciences at the Florida State University College of Medicine — and one of only a few in the whole country. As of 2014, among the 4,923 graduate students in U.S. neurobiology/neuroscience programs, only 163 were black.

“I never imagined it to be this big, but I’m glad it is,” Jones said. “It’s 2017 and still an African-American being a first has created such honor and motivation and inspiration. I’m talking to people in Tennessee, or California, or other countries and they’re asking me for tips about biomedical programs, putting up with long hours in the lab and asking what kept me interested and driven. I think it’s wonderful.”

The significance of Jones’ achievement is not lost on the College of Medicine. Discussions are under way to improve the pipeline for future minority researchers — and to continue to diversify the faculty. 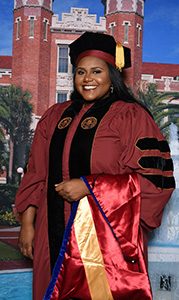 Jones, now a role model herself, credits the mentors and advisors who guided her.

During her five years at FSU, she worked under Professor Pradeep Bhide, the Jim and Betty Ann Rodgers Eminent Scholar Chair of Developmental Neuroscience in the Department of Biomedical Sciences. She successfully defended her dissertation on dystonia, a disease causing involuntary muscle contractions, and was awarded her degree in neuroscience at the summer commencement ceremony.

“She has had a number of challenges that she went through outside of research, and she is very resilient, deals with it well and gets things done,” Bhide said. “It’s great that she’s gone this far. She would stand up against any student anywhere.”

There was always a lot of pressure, Jones acknowledged.

“Not only am I the first black graduate,” she said, “but I was Pradeep’s first grad student, I’m the first Ph.D. in my family, and I don’t have any friends who have a Ph.D.

“There were many times when I wanted to give up. I didn’t know how I got there or if I was even good enough. Eventually it got to the point where I would talk to certain members in my department, such as Dr. [Richard] Nowakowski [the department chair] and Dr. Bhide, who always said, ‘We wouldn’t let you get to this point unless you were capable and knowledgeable enough to do so.’”

From an early age, Jones’ ability to overcome scientific challenges taught her she could do the same when facing tests outside the lab.

“I remember everyone was kind of challenged by science class, and I took that and made it something competitive for myself,” Jones said. “I told myself it would be amazing if I could understand it. My scientific curiosity sparked so many other parts of my personality to where I can take challenges a lot easier now. I don’t see trouble when I think of certain elements of life. I see it as something I can get past or learn to get through.”

Jones’ path to FSU began at Virginia State University, where she earned her bachelor’s degree in biology. As a graduate student there, she conducted research and worked as a teaching assistant under mentor Glenn Harris. Nearing the end of her master’s program, Jones sought out an opportunity to study abroad and teach kids in Ghana. Her experience in Africa became her inspiration to pursue her doctoral degree.

“I was teaching kids who got so excited to learn, even if I was just teaching them the smallest thing,” she said. “I loved that feeling so much that I realized I wanted to continue doing that. I wanted to teach, study, volunteer and even create study-abroad opportunities for other students.”

Through involvement with numerous outreach programs, including the Young Carver after-school program in Tallahassee, Jones continues to teach and connect with kids through science. She visits elementary schools with predominantly minority students and conducts hands-on experiments to introduce kids to STEM. As she continues to work in Bhide’s lab finishing a project related to her dissertation, she’s pursuing faculty and postdoctoral positions that can afford her the opportunity to continue influencing and encouraging the next generation of minority neuroscience researchers.

“I think it is very important to have that pipeline created even as early as elementary school,” Jones said. “I fear for the people who don’t have advisors like I did, who can guide them toward their future and give them the knowledge and motivation to do it on their own.”

The College of Medicine is strongly committed to addressing the barriers facing minority students who want to pursue research careers, said Jeffrey Joyce, senior associate dean for research and graduate programs. He points to the Bridge to Clinical Medicine program as a possible template.

“If funding is available, we’d like to actually establish a Bridge to Ph.D. program as a pipeline to make students competitive and give them research laboratory experience,” he said. “I think one of the most important things is to continue to work toward diversifying our faculty as well.”

Providing diverse role models for minorities is one way to attract a more diverse population of students.

“It’s important to have people in place who look like me for students up-and-coming,” Jones said. “Because although I can go talk to any of my professors, it’s different when you’re talking to a professor who looks like you, who went through those same things.”

Three people were injured early Saturday when their vehicle ran off the road. The crash in the 600 block of... read more