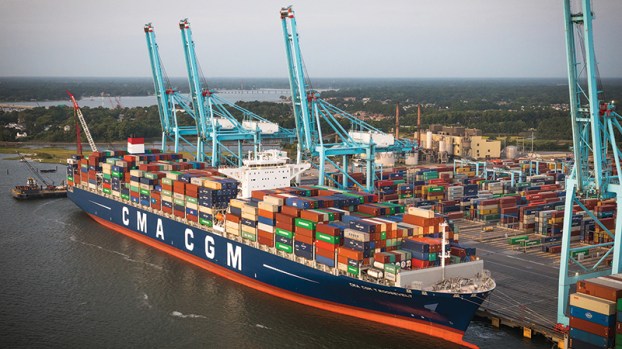 The CMA CGM Theodore Roosevelt has a capacity of 14,400 twenty-foot equivalent units, making it the biggest container ship to ever arrive on the East Coast when it made its first stop at the Port of Virginia on Monday. (Photo courtesy of the Port of Virginia)

The Port of Virginia on Monday welcomed the latest of several record-breaking ships that have called this summer.

The CMA CGM Theodore Roosevelt was guided to the Virginia International Gateway early Monday morning, where port officials and CMA CGM North America leaders met for the occasion, according to a Monday press release.

The ship’s capacity of 14,400 twenty-foot equivalent units makes it the biggest container ship to ever call on the -ort and the East Coast, surpassing by more than 1,000 the OOCL Development ship that called on the Port in June and the COSCO Development in May.

“This is a notable step up in size,” Virginia Port Authority Chief Executive Officer and Executive Director John Reinhart stated in the press release. “In Virginia, the big-ship era started in May, and we continue to see larger and larger vessels.”

Roughly 3,000 containers were unloaded and loaded on the 1,200-foot-long CMA CGM Theodore Roosevelt on Monday. France-based CMA CGM is part of the OCEAN alliance with COSCO, Evergreen Line and OOCL, in which members contribute ships and share space on vessels.

The Theodore Roosevelt came to the port via the Panama Canal as part of the alliance’s South American Express service. This weekly service between Asia and the East Coast of the United States features 11 vessels ranging from 11,000 to 14,000 TEU capacity, with Virginia as the first port of call, according to the press release.

“The $670 million we are investing to expand Virginia International Gateway and Norfolk International Terminals will enhance our big-ship readiness and our ability to safely and efficiently handle their increasing cargo loads,” Reinhart stated. “Last week, we ordered four new ship-to-shore cranes for VIG, and they will be the largest ever delivered to the East Coast. It’s ships like this and those to follow that are driving our expansion.”

As part of its efforts to accommodate increasingly larger vessels, the port is working with the Army Corps of Engineers to study the economic advantages of dredging the port’s channel depth from 50 to 55 feet. Virginia Port Authority spokesman Joe Harris said it will be at least a year before modeling and simulations lead to an agreement on the ideal depth.

“We’re trying to ensure that any modeling is being done on the biggest ships and boats to come,” Harris said. “We want to get it right the first time.”

Protecting the rights of others

By Joseph L. Bass One of the great challenges in the United States today and in the past has been... read more