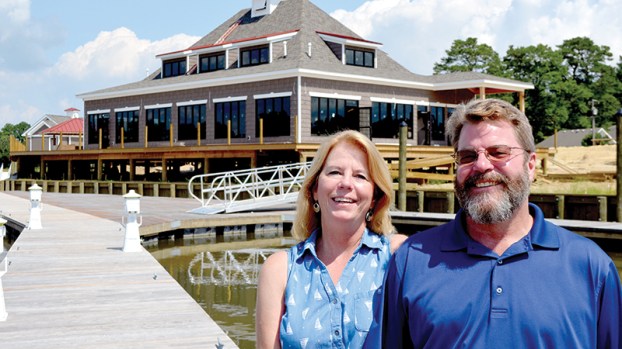 Brian and Teresa Mullins, the developers of the Bennett’s Creek Marina, Decoys Restaurant, Blind Dog tiki bar and the Landings at Bennett’s Creek residences, are also the owners of the River Stone Chophouse and Vintage Tavern restaurants in North Suffolk.

Added accommodations and other improvements have pushed back the opening of the Bennett’s Creek project that’s had increasing community interest since construction began.

Developers and restaurateurs Brian and Teresa Mullins have been working on furnishing the former site of Bennett’s Creek Marina and Restaurant on Ferry Road with a new restaurant, marina and residential neighborhood.

The scheduled debut of the restaurant and marina has been pushed from October to February to finish construction of waterman cottages on the eight-acre property. The shoreline cottages will have their own fixed dock for multiple boats, in addition to the 54 slips that will be available at Bennett’s Creek Marina.

An additional half-mile of walking trails is being added to the previously planned mile, and a beach section will be prepared between the cottages and the ship store near the Decoys Restaurant, Brian said.

“Folks can go into the pool, but they’ll also have a sandy beach area where they can lay out, or bring their paddleboards or kayaks,” he said.

People are expected to come to the Decoys restaurant and Blind Dog tiki bar by both land and sea. The tiki bar is expected to open in March, Brian said, as well as the adjacent pool with a bar top and seating for swimmers.

The expansion of Ferry Road from 12 feet wide to 20 feet is expected to finish this fall, which will be a benefit for both visitors and residents that have struggled with that narrow pass over the years, he said.

“It’s not just for the folks coming to the restaurant,” he said. “It’s going to improve the life for everyone that lives up and down Ferry Road.”

There are 23 planned residences for the Landings residences, with an additional unit added to the 22 formerly planned, according to Brian. He said the costs for the homes have risen to at least $500,000 due to the added amenities on the property. Yeates Road will be renovated and renamed Waterman Landing.

Flex material is being used on the waterside to keep the spaces clean and allow for grasses and flowers that promote coastal aesthetics. Fishing tournaments will be planned to take advantage of the numerous fish found in the James River, Brian said.

He described the overwhelming interest in the site from the community, with more than 100 applicants for the Landings residences, regular phone calls and dozens of cars driving down Ferry Road to get a closer look.

“It’s like they’re on the edge of their seats,” Teresa said.

The Charlottesville Police Department has charged two men with an assault on a Suffolk native during a rally of white... read more