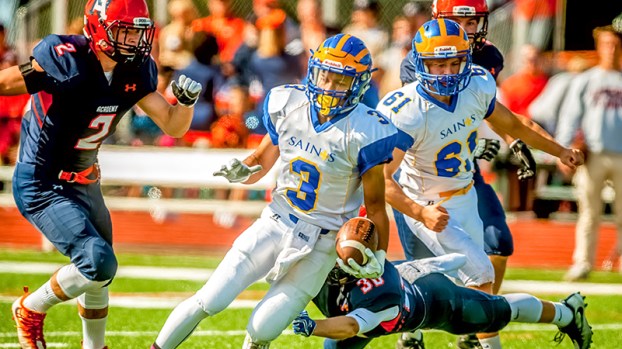 Erek Smith had three interceptions for the Saints in their season opener against Norfolk Christian on Saturday. Sam Mizelle photo

The Saints football team opened up its football season 0-1 on Saturday with a 41-20 loss on the road to Norfolk Christian.

NSA’s effort didn’t indicate the final score shown on the score board.

Coach Mike Biehl coached his second season opener for the Saints in what was an up-and-down performance by the team. In the first half, the Saints defense played well. They shut out the Norfolk Christian offense and didn’t allow any offensive touchdowns.

However, the Saints weren’t as polished offensively as they had hoped. The Ambassadors’ only touchdown of the first half came off of a strip sack of quarterback Robby Tew inside the five-yard line. For the game, Tew accounted for 307 yards, passing for 296 and rushing for 11 but also threw five interceptions.

Biehl was adamant about Saturday not being the outcome he wanted, but he saw good things from his team.

It was only the first week, so there is no need for NSA to panic. The Saints got standout performances from senior Erek Smith who had three interceptions last Saturday which included two in the first half. Ehron Knight had 114 yards receiving and an interception. Zac Morris also added 79 receiving yards on five catches. Ben Koppelman added 58 yards rushing and 40 yards receiving.

In the third quarter, NSA and NC had a slight back and forth, but the Ambassadors took the quarter. Both teams put up their highest point total as NC put up 21 points to NSA’s 12. The hope for the future is that NSA plays a complete game that sees the defense and offense both playing at a high level for a full four quarters.

“The guys have very high expectations for themselves,” Biehl said. “Anytime they don’t play the level they are capable of, I think that’s frustrating for them, and that’s what you want to see. I’d be more concerned if the guys just brushed the loss off.”

Biehl mentioned that he felt more comfortable on the sideline. He enjoyed watching his team play and described late summer as “the best time of the year.” With so many things going on in the world today, Biehl said he felt appreciative to be able to wake up, coach another game and watch his players play.

“The outcome wasn’t what we wanted, but we’re playing football.” Biehl said. “We are all lucky considering everything going on around us in the world. I’m lucky to be coaching a good team at a good school. The players are looking to be able to go out and play the game they love.”

NSA will play North Cross School on the road this Friday.