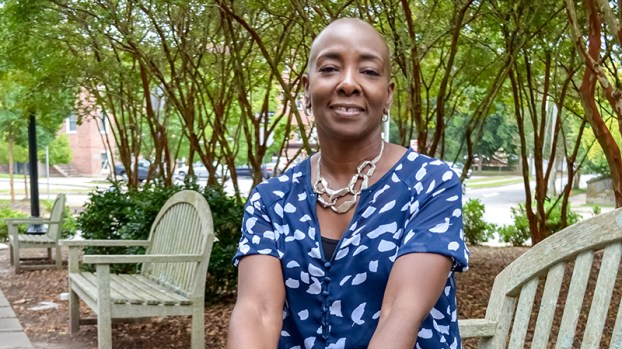 September is Alopecia Areata Awareness Month, and for those like Ericka Counts, it is a time to share their stories and raise awareness.

Counts started losing her hair about 25 years ago, sometime around her freshman year in college at Howard University in Washington, D.C.

“Initially I noticed my hair loss by just combing my hair and there would be so much hair on the comb,” Counts said. “Then there were times I would just drive down the street and I would notice hair coming out.”

In 1996, she was diagnosed with alopecia areata, an autoimmune skin condition that affects about 2 percent of the United States, according to the National Institute of Arthritis and Musculoskeletal and Skin Diseases. Her immune system attacked hair follicles on her scalp and ultimately suppressed any hair growth.

Alopecia totalis occurs when the condition leads to complete baldness of the scalp, while alopecia universalis results in complete loss of hair over the entire body.

There is no cure yet for this condition. Counts received cortisone shots in her scalp and applied Rogaine to try to stimulate growth. These treatments sometimes lead to hair growth, but that growth isn’t necessarily permanent, she said.

“You just kind treat the symptom and hope it will turn things around, but it doesn’t, because there’s no cure,” she said.

That changed when she decided to face her fears head on and stop wearing wigs four years ago, she said.

“I just asked God to give me the strength to take the wig off, and He did,” she said. “I took it off and never looked back.”

Counts moved to Suffolk about two years ago to be closer to family, and she now works as an occupational therapist at Amedisys Home Health Care in Norfolk. She’s a member of Rising Star Baptist Church in Smithfield.

She said she’s more confident now than she has been in the long years that followed her initial diagnosis.

“She inspires people by being just who she is,” said Suffolk resident Shauna Wilkins. “She has very positive energy.”

Counts said her journey with this condition is still ongoing. She still gets the occasional looks, and people may still have false assumptions about her.

“People approach you and assume you have cancer, or assume you are sick in some kind of way,” she said. “But then, on a positive note, you have other women going through it that look at you as a brave person for doing this.”

She wants to raise awareness of alopecia and ensure that others understand the nature of the condition. She also wants to encourage fellow alopecia sufferers to do what’s best for themselves.

“For the people suffering with alopecia, it’s OK if you continue to wear wigs or decide not to,” she said. “Just be comfortable being you.”

A 26-year-old man has been arrested following his indictment last week on charges of homicide and possession of heroin with... read more