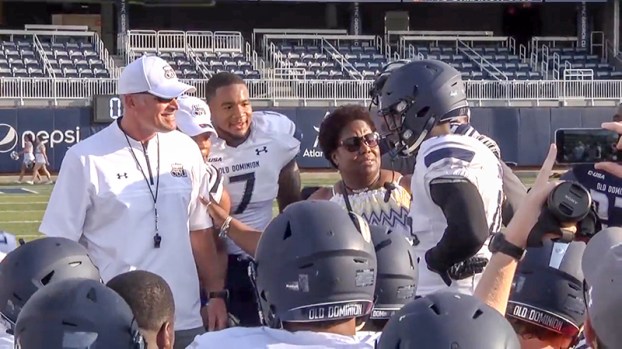 Demetrius Stitmon receives the good news from his mother and coach that he has earned a full scholarship to Old Dominion University. His family, coaches and teammates recently surprised him with the news.

Stitmon was surprised by his coaches and teammates with a full scholarship. Originally a walk-on, Stitmon redshirted as a freshman last season. Last Saturday, the Monarchs had a final team scrimmage before the season started. Before the scrimmage, the team had a special ceremony to present the former Warrior with a scholarship.

Stitmon said he put his pads on that day knowing that he had to perform well in the scrimmage to earn time this year but not having any idea what was about to happen.

He went through his usual pre-game routine with the team, and as everyone broke off to the sideline, he saw family, friends and old coaches. Nothing registered to him yet until he saw his mother off in the distance. As soon as he saw his mother, he dropped to his knees and said a prayer, because he still didn’t fully understand what was going on at the moment.

From there, the team gathered at the middle of the field where he had met his mom and coaches. Soon after, his mother gave him the news that he had received a full scholarship. The whole football team celebrated with Stitmon, jumping on him and giving him high fives.

“It meant so much to me, because not many people know my story and what I had to go through,” he said. “All I could do was smile and say thank you. I saw and heard stories of guys who had gotten scholarships, and they had all did the same things that I did. I just worked as hard as I could to prove I was of some value to the team.”

Prior to making it to college, Stitmon went through some trying times. His father, who supported him at every game, died of colon cancer in 2014. The death had a significant effect on him.

Stitmon had been a member of the varsity team since his freshman season. He broke out in his sophomore year, earning a starting role at linebacker. His father’s death affected him so badly during his junior season that he ended getting moved down the depth chart and barely played defense at all.

But the following offseason, he worked hard to regain form. During his senior year at Nansemond River, he finished with 60 tackles, 16 sacks and 15 tackles for loss. He ended up receiving an offer from Norfolk State University but decided not to attend, because NSU didn’t have the major he was looking for. ODU had his major, so he decided to walk on there.

After redshirting and having to pay for school in 2016, Stitmon is now on full athletic scholarship and is fulfilling a promise he made to his mother.

“I told my mom when I turned down my NSU offer to walk on at ODU that I would earn a scholarship, and she wouldn’t have to pay for school,” Stitmon said.

The Saints football team opened up its football season 0-1 on Saturday with a 41-20 loss on the road to... read more