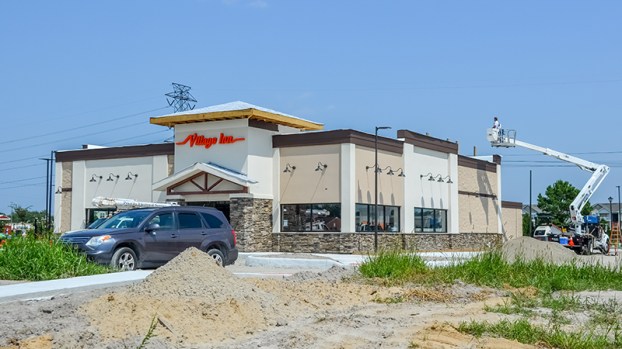 The Village Inn restaurant located by Kroger and Zaxby’s on College Driver is expected to start serving customers this October.

Weather delays have pushed back the debut of a new restaurant in the Hampton Roads Crossing neighborhood.

The Village Inn on College Drive is expected to hold a soft opening in October, rather than August as had been previously planned. Contractors broke ground in March, but the project was delayed by May rainfall, according to restaurateur and co-owner John Georghiou.

“It was just a mud pit for about five weeks,” Georghiou said. “We lost some time, but we’ve had some good weather for the most part, so we’re trying to get through it now.”

Interior work for the restaurant and paving on the property are expected to be finished by Sept. 15. The restaurant will be able to seat roughly 160 to 170 people, with a staff of more than 60 employees.

Gheorghiou said 20 to 30 employees already have been hired for the restaurant, with 30 to 40 more needed. Most will be hired rather than moved from other locations, such as the Village Inn Chesapeake franchise also owned by Gheorghiou.

He said a soft opening is planned instead of a grand opening to better evaluate employees before business picks up.

“We want to make sure we have a good handle with all of the employees, and get a few weeks for them to prove to us they’re doing a good job,” he said.

Georghiou will co-own the Suffolk franchise with his son, Bill, who has more than a decade of restaurant ownership experience. His father has owned nine restaurants during more than four decades.

The Village Inn will serve breakfast all day with an extensive selection of skillets, omelets, French toast and other breakfast staples. The menu will also include lunch and dinner options such as sandwiches and pot pies, along with an array of dessert pies and other offerings.

Question: What is your favorite part about Suffolk?