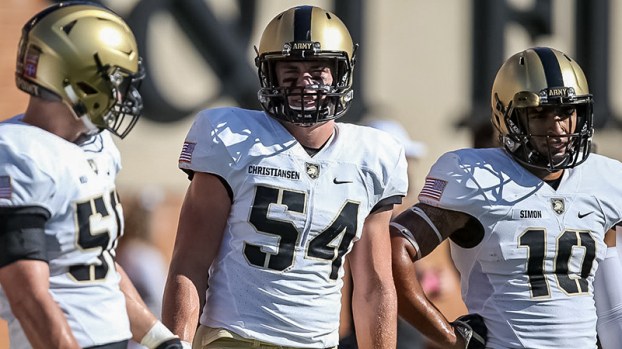 Cole Christiansen, center, will be starting at outside linebacker this year for Army. The Nansemond-Suffolk Academy graduate and his team will open their season Friday. Army photo

Christiansen to start at linebacker

After a strong camp by the sophomore linebacker, the former NSA standout was named a starter at the outside linebacker position. Christiansen was originally the backup middle linebacker, but his head coach was so impressed with his camp that he switched his position so that he could start.

This is what Army coach Jeff Monken had to say when asked about Christiansen moving into a starting position:

“Cole has had such a good camp, so we felt he needed to move up into that starting role. So we moved him from the backup Mike (middle linebacker) to the Will (weak side linebacker). Cole is an outstanding football player, and I’m excited to see his hard work pay off. This will be a good opportunity for him.”

Christiansen is excited about his opportunity to start, which will come this Friday in the season opener. He was going into a team meeting last week when his linebacker coach pulled him and said they were moving him from middle linebacker to weak side linebacker.

“I was so happy,” he said. “It’s what I’ve been working for since I got here. I worked really hard during spring ball and did my best during camp, and the coaches decided I was the best guy for the job.”

Being named a starter has given the sophomore Black Knight more confidence. Before camp even started, Christiansen stayed in West Point, N.Y., over the summer to continue to work on his game. His goal was to start a couple of games this year. Now, he will get his chance.

Last season, Christiansen played primarily on special teams and had a pair of tackles. The former Saint had bulked up to 231 pounds and feels good about his understanding of the defense.

At NSA, Christiansen was a two-time Virginia Independent Schools Athletic Association Defensive Player of the Year. He helped lead NSA to a state championship in 2015 while also being an all-conference and all-state player.

Army will open their season at home Friday against Fordham University. The Black Knights will play on the CBS Sports Network.

Tatyana Thomas set a school record 11 blocks in a game for the University of North Carolina at Charlotte in... read more