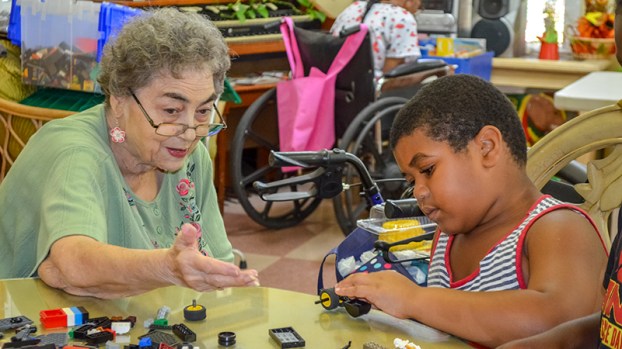 There are a lot of years between preschool and the retirement community, but a program this summer has helped bridge the gap for two generations of people living in the Belleville community.

The program was organized to foster relationships between them and to promote social interactions between children and seniors.

“I was looking into research about the benefits of seniors and youth interacting,” said Suffolk library services coordinator and program organizer Shawna LoMonaco. “I decided to find the two that were closest together and see if they were interested in partnering.”

More than a dozen children came to each of the monthly sessions at the retirement community, starting with the first session on June 29. Children played games with the seniors, colored pictures and added some excitement to their community.

“It’s just all fun, and I think it helps us stay younger, too,” Plummer Plaza resident Jackie Reth said.

The groups spent their second session in July playing “The Price is Right”-type games at the request of the seniors, and some were impressed by how sharp their younger competitors were at this price-guessing challenge.

“They are cost-conscious, and that surprised me,” said resident Jerry Wright. “They’re smarter than they appear to be.”

Seven-year-old Anthony Davis came to the final session on Thursday and enjoyed building at a table covered in Legos. He enjoyed making airplanes and tractors with the elders, who were eager to help with his creative endeavors.

“When I need some help building, I ask,” Anthony said.

Some of the children took pride in showcasing their creations, like 7-year-old Jeremiah Wright with his aircraft carrier of brightly-colored bricks.

“I just love them to death,” Jerry Wright said. “All of them have different mindsets. They are united in that age group, but still they all have their own individual ideas.”

Woodley said she was thankful for the opportunity to work with Antioch and build that relationship. Antioch administrative assistant Chanelle Rodgers expressed that the feeling was mutual.

“Now we’re able to do fun things with each other and help each other out,” Rodgers said.

LoMonaco said there was interest in holding this program in the fall to connect more pairings of young and old and to foster more positive relationships.

“It’s very stimulating for our mind, our spirit, everything,” said resident Grace Holmes. “It really helps us.”