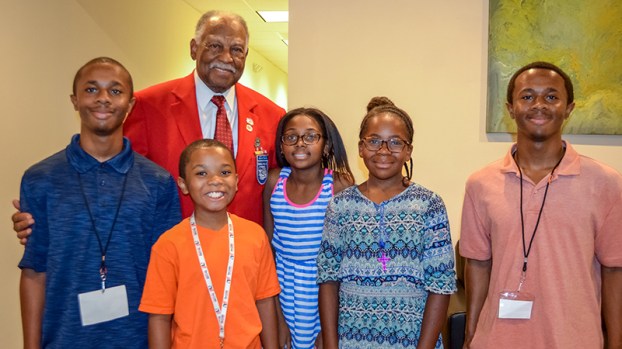 A distinguished veteran met with Suffolk STEM Youth Academy students at the closing ceremony for the academy’s Summer Road Tour on Thursday.

The academy’s 26 young students faced a series of science, technology and engineering challenges over the summer. Students were joined at the Suffolk Executive Offices on West Washington Street by Councilmen Lue Ward and Mike Duman, along with Tuskegee Airman and guest of honor Dr. Harry Quinton.

“It’s a great program,” Quinton said. “It’s something that I didn’t have during my youth.”

Organizer Simone Thomas worked with partners such as Duman, the Greater Oakland and Chuckatuck Civic League and Chick-fil-A to provide STEM opportunities for the students at seven different sites. They met each Thursday over the summer after a kick-off at James Madison’s Montpelier on July 8, where they roleplayed the signing of the U.S. Constitution back in 1787 and dug into an archeological exercise.

“I was amazed by the schedule she put together,” Duman said. “It was very robust.”

The final challenge for the students was a robotics exercise on Aug. 17 at the Mariner’s Museum in Newport News. Teams piloted remotely operated vehicles made of PVC tubing that featured their own additions they made with craft materials to allows the ROVs to pick up boxes in the bottom of a pool.

The challenge simulated retrieving derelict crab pots in the Chesapeake Bay as a demonstration in environmental conservation tactics.

“It was definitely harder than it looked,” said 9-year-old Kaitlin McCleod. “And it was really fun.”

Kaitlin said when she’s older, she wants to be an astronaut, and the program taught her that she needed to stay focused and study if she wanted to get into space.

Her parents, Opal and Ricky McCleod, were grateful that their daughter was exposed to these STEM opportunities.

“A lot of kids don’t go into those fields because they are not exposed to them,” Ricky McCleod said.

Twin 17-year-olds Lamar and Lamont Jones learned that these opportunities are crucial for their career pursuits. Lamont said he was interested in computer science, while Lamar was keen on architecture design software.

“It gave me a better understanding of what I have to do to become an architect and pursue STEM technology,” Lamar said.

Plans for an Academy Road Tour next summer are just beginning, Thomas said, but parents have already expressed interest. She said the enthusiasm of the students was enough to warrant another tour.

“They knew the answers, they could ask the questions and they could articulate,” she said. “Everyone that has gone through this whole program has been enriched through this type of exposure.”

In addition to a lesson on airplane aviation, Quinton said he wanted the students to understand that they need to keep learning long after this program. That way they will be prepared to seize opportunities in the future.

“You should prepare yourself for what you want to do, and when the opportunity presents itself, you have to have the qualifications to take advantage of it,” he said.

The only losers on National Night Out were the criminals, but a special group of winners from the event were... read more