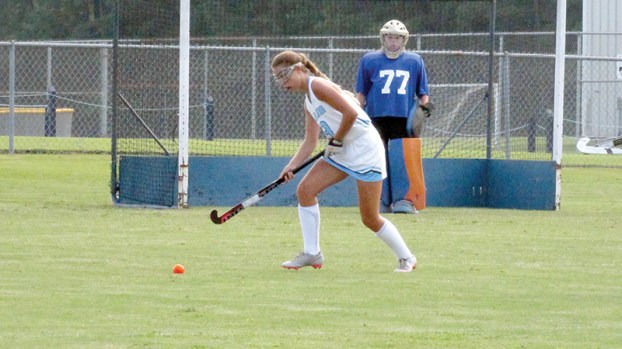 Sarah Stansick had a hat trick and two assists for the Lady Cavs in Lakeland High School’s first win of the season over Deep Creek High School.

The Lakeland High School field hockey team picked up its first win of the season this week against Deep Creek High School.

The Lady Cavs won at home Wednesday against Deep Creek, giving them a 1-3 record. Throughout the first four games of the season, Lakeland has played some really good teams. But there is still a lot of field hockey to play, and Lady Cavs coach Cortney Parker isn’t concerned about the record right now.

“We have a lot of work to do,” Parker said. “We’ve had a couple of injuries we’ve had to work through, but I think we will be okay. The season is long.”

Lakeland is taking every game as a potential learning experience. In the Deep Creek game, Parker liked how her team created a lot of offense. They showcased their team speed, which helped them spend more time pressing for goals.

“The girls were aggressive and hungry for the ball,” she said. “They played well. I was happy with what they did.”

In the future, Parker wants to see her team play better defense and score more. Defense and putting the ball in the net will be the focus during the next few practices.

Lakeland will play Grassfield High School on the road Wednesday at 5:15 p.m.