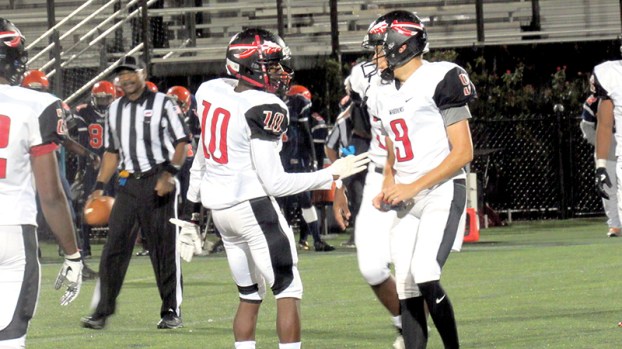 Senior running back Wali Faulk had 173 yards on the ground and two touchdowns to give the Warriors their first win of the season.

Nansemond River burned up a lot of grass at Powhatan Field Friday, rushing for 275 yards en route to a win in the team’s season opener. Maury High School had trouble staying within the gaps trying to slow down the Warriors.

Faulk had an impressive performance, adding two second-half touchdowns to his rushing totals.

No one got on the scoreboard until late in the first quarter. Warriors quarterback Kori Riddick completed a pass to Jaquan Braybay that went for a 60-yard touchdown. An Evan Lomax extra point put Nansemond River up 7-0 going into the second quarter.

Riddick finished the game at 3-6 for 85 yards and a touchdown.

With 11 minutes to go in the second quarter, Maury got on the board with a 35-yard rushing touchdown by Kevin Mills Jr.

Following the touchdown Nansemond River took over on its own 17-yard line. Their drive stalled, and the Warriors back to Maury, which also couldn’t get another touchdown on the board before halftime. The teams were tied 7-7 at the half.

After halftime, Maury quickly came out and put points on the board with a 65-yard passing touchdown.

With nine minutes left to play in the third, lightning threatened the safety of the area, which caused for a lightning delay. Everyone in the stadium was asked to evacuate until the delay was over. The delay lasted for about 40 minutes before teams and fans were let back into the stadium to finish the game.

Once the game resumed, Nansemond River answered the Commodores’ touchdown. Faulk had a 25-yard touchdown run to tie the game again. The energy started to pick up for the Warriors.

On the Warriors’ next possession, they capped an 85-yard drive with another Faulk touchdown. His second touchdown went for 15 yards. Heading into the fourth quarter, the Warriors were up 21-14.

Nansemond River’s defense increased the pressure in the fourth quarter. Defensive linemen were getting into the backfield and were hurrying the quarterback. Maury could barely muster a solid drive it.

With a minute left to go in the game, the Warriors sealed the deal with a JaQuelle Harrell eight-yard rushing touchdown.

“We started off slow but I was pleased with our effort in the second half,” Warriors coach David Coccoli said. “At the time of the in delay, we weren’t playing very well, but we came out of it strong. There’s some things we could have done better, but we’ll work on it.”

Nansemond River is 1-0 and will have its home opener Friday against Hickory High School.

Lakeland High School’s football home opener on Friday was called due to lightning, with the Cavaliers ahead of Wilson High... read more