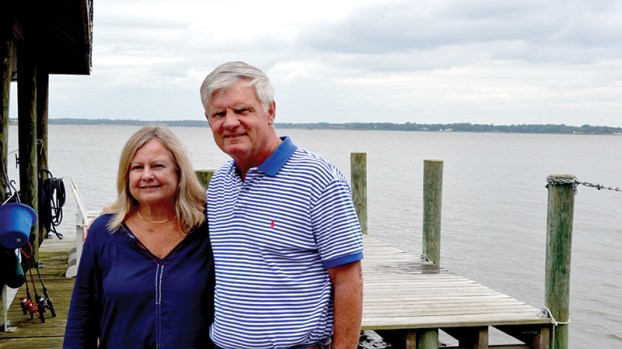 Jim and Mary Jane Metzger had a plan for their dream home.

After Jim finished more than 30 years in the Navy in 2005, the retired admiral and his wife looked for a space to build their ideal residence. It’s no surprise the retired admiral wanted a home on the water, which is what they found in North Suffolk.

Sitting on their back porch in the mornings with their dog Scout, the couple enjoy morning coffee in the silence of their backyard, punctuated by birds and other wildlife on the Nansemond River. Mary Jane said the view is great for sunsets and the occasional storm.

‘When a storm comes up, it’s a great place to watch it roll across,” she said.

The pair are just two of the residents in the Riverfront at Harbour View neighborhood off Harbour View Boulevard, and theirs is just one of 60 homes built by open water in that community since 2000.

According to Branch Lawson, president of East West Communities, Hampton Roads, the developer of The Riverfront, there has been increasing interest by homebuyers wishing to build their dreams on the water since the housing crisis wracked the market nearly a decade ago.

“There’s been an increased demand in the last year where you see more sold signs going up and fewer properties available,” Lawson said. “More people are going ‘Yikes, if we’re going to do this, we’ve got to get serious about it.’”

Four available waterfront lots are left, Lawson said, and he expects those to be bought within a year.

“There’s really not that much land available with great waterfront that hasn’t already been developed or spoken for in some other way,” he said.

The Metzgers worked with Sasser Construction for their Riverfront residence, one of the major construction companies for the neighborhood. These homes can potentially cost more than $1 million, and each requires careful design choices.

“Everybody wants every single room to face the water,” said Eric Sasser of Sasser Construction LC. “It’s a challenge.”

Sasser said he had mixed emotions about building out the remaining water-benefited lots in the neighborhood.

“As we’re getting down to the last few home sites, it’s exciting to see them all finished, but at the same time it’s bittersweet,” he said.

The Metzgers made their picturesque backyard with their grandchildren in mind. A zipline runs from a tree to the end of the pier, the expansive grass caters to bursts of running, and their pier is equipped with crab pots and recreational vehicles.

There are also helicopters, fishermen, birds and dolphins that can be witnessed on the Nansemond River from their own backyard.