A bright day at Elephant’s Fork

The first day of school at Elephant’s Fork Elementary School will be a brighter one than usual for teachers and students.

A number of projects around the school building over the summer helped create a more inviting atmosphere for the people who teach and learn there every day. And the vast majority of it was done at no cost to taxpayers, assistant principal Garrick Rhoads said.

“It’s really been about everybody doing a little something to get this building looking the way we want it to look,” he said.

The hallways and doors in the school were formerly painted brown. 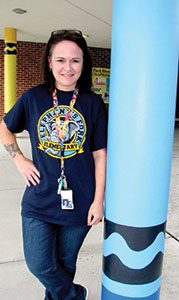 Elephant’s Fork Elementary School art teacher Meredith Kerr painted the columns on the outside of the school like pencils and crayons over the summer to welcome students back to school with bright colors.

The hallways were transformed to yellow and white, and doors were painted blue, Rhoads said. Many different groups contributed to that effort, including staff, sailors from the Navy Cyber Defense Operations Command Suffolk and a group of three churches — Southside Baptist Church, Open Door Church and Cypress Chapel Christian Church — during their “Serve the City” project in July.

Art teacher Meredith Kerr also painted the columns at the front door and at the bus ramp to resemble pencils and crayons with the same yellow-and-blue color scheme, using donated paint.

“It’s like a hug to start your day when you walk in the building,” Kerr said.

Rhoads said the new colors inside and outside have already had a positive effect on the school atmosphere.

“I think it’s already been uplifting,” he said. “They tell me how much brighter the hallways are. It lifts their spirits up.”

“It was much needed,” said Norma Williams, a teacher assistant at the school.

A new banner with “Home of the Herd” — a reference to the school’s elephant mascot — will also greet students. 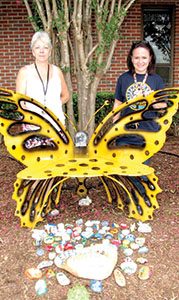 A rock garden is another element to add a splash of color to the school’s entrance. Staff at the school already have created painted rocks with their own personal touch and arranged them near the front door, surrounding a butterfly bench and a few large, decorative rocks. Students at the school will be able to paint their own rocks to join them throughout this school year.

Kerr said she hopes all of the improvements will help the students.

“They’re so bright and creative,” she said. “They need to know they can work hard and reach for anything they want to reach for.”

This September marks the 16th anniversary of the terrorist attacks of Sept. 11, 2001, and a Suffolk church is partnering... read more