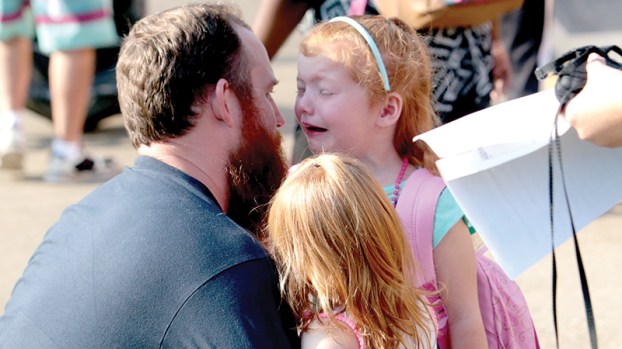 Chad Taylor comforts 5-year-old daughter Charly on the sidewalk in front of Driver Elementary School on Tuesday as 2-year-old Chelsea and mother, Courtney (not pictured), look on. Charly was not completely sold on the idea of the first day of school.

Back to school for Suffolk

Parents Huy and Kimberly Tran dropped off Alexander for his first day of first grade with the typical mixed emotions. This was one of many similar experiences at the start of the 2017 school year for Suffolk Public Schools.

More than 13,000 enrolled students started classes on Tuesday. Both parents and bus drivers transported students safely with no notable issues, according to spokeswoman Bethanne Bradshaw.

“Our teachers and staff did a wonderful job setting the tone for a great school year, and got started right away with instruction.” Bradshaw stated in an email. “Everyone was excited for a fresh start to their academic growth.”

Younger students stepped off buses at the city’s elementary schools and were given tags to keep track of their afternoon bus schedules.

“We tag them so know where they need to go for the rest of the week,” said Northern Shores first-grade teacher assistant Ro Henderson.

Many students were walking into new school environments with their families. Then there were some like 8-year-old Madyson Knox, who ran to hug her friend and fellow third-grader Cecilya Henderson.

Both were happy to see each other, which was a treat for Cecilya’s father, Donnye Henderson.

“She’s very comfortable, and she’s happy to be here,” he said.

Younger students had many firsts on the first day of school.

Creekside Elementary School first-grade teacher Shaunda DeRon was one of many first-grade teachers teaching students how to stand during the pledge of allegiance. Students also learned proper school etiquette while getting to know one another.

“The morning is just a little bit hectic, but I can already tell I have an amazing group of students,” DeRon said. “They’re good listeners, and they’re excited to be here.”

The commotion had settled down by the afternoon as both students and faculty eased into a new school year. Students like 5-year-old Creekside Elementary School kindergartner Hannah McKay were excited for what this year will offer.

Jim Ritchie thinks about his dad a lot during his volunteer work with the Commemorative Air Force. Ritchie is a... read more