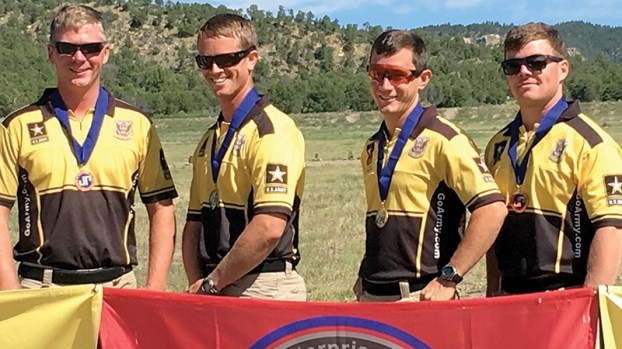 By Michelle Lunato
Special to the News-Herald

Summer is typically a time for relaxed days off with backyard cookouts and lounging by the pool. But soldiers in the U.S. Army Marksmanship Unit have faced the complete opposite.

Their summer has been filled with long hours of travel, hard work and determination, resulting in championship titles, coveted awards and new marksmanship records.
Each shooting team has lived up to USAMU’s ”home of champions” moniker this summer, continuing its reign of domination by adding more triumphs to the unit’s already long list of accomplishments.

Sgt. 1st Class Daniel Horner of Suffolk is a member of the Action Shooting Team, which capped the season with a gold medal in the team championship match during the 2016 Rocky Mountain Championship Aug. 11-14.

Horner and two of his teammates, Staff Sgt. Joel Turner and Sgt. Matthew Sweeney, received individual gold medals for their shooting divisions — limited scope, limited iron and he-man scope, respectively. Sgt. Tyler Payne, another teammate, won a silver medal in the open division.
Earlier in the summer, during the 3-Gun Nation Regional in Clinton, S.C., held June 1-4, Horner, nine-time USPSA Tactical Optics Multi-Gun Champion, took first in the Practical Division.
Through the years, competitive shooting soldiers from the USAMU have relied upon their successful experiences to create a number of lesson plans for the force.

In May, for example, the Instructor Training Group Soldiers took their combined knowledge to Fort Knox, Ky. In a train-the-trainer style event, USAMU ITG Soldiers provided hands-on training and feedback to more than 50 non-commissioned officers assigned to the 3rd Cavalry Regiment.

Those NCOs then led marksmanship training for the Cadet Summer Training Program that trained more than 13,000 cadets.