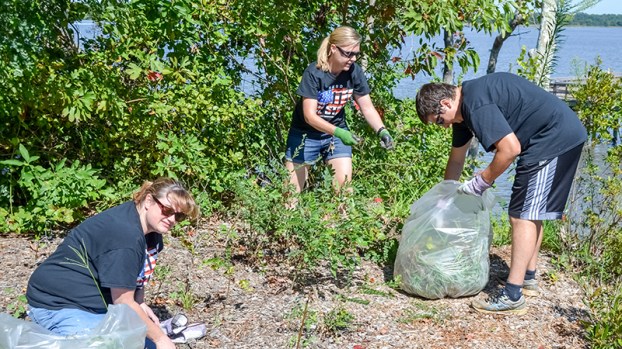 HRSD employees tidy up the shoreline at Sleepy Hole Park during the United Way of South Hampton Roads Day of Caring on Friday. From left are Shawn Maxfield, Christene Mitchell and Korey Kendall.

Volunteers fanned out across Hampton Roads on Friday for the United Way of South Hampton Roads’ annual Day of Caring.

In Suffolk, volunteers helped improve and maintain parks and helped at the Salvation Army, Children’s Harbor and Head Start locations.

The event was founded in 1991 to promote volunteerism, raise awareness for service organizations and demonstrate how working together achieves results. 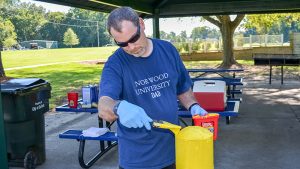 Jason Strange came with his wife, AECOM employee Leigh Strange, to Bennett’s Creek Park to paint and clean during the event.

“We are honored to participate in the United Way Day of Caring and appreciative of the United Way’s efforts to build stronger communities by mobilizing volunteers to tackle various service projects in our community,” Pittman stated in an email.

Volunteers at Bennett’s Creek Park applied fresh paint to poles, doors and small bridges. Loose trash was also collected both there and at Boston Park on Lincoln Avenue.

In doing so, volunteers eased the burdens on Parks and Recreation staff.

“We enjoy it,” said AECOM employee Alissia Lancaster. “We know the parks team can’t keep up with the work on their own, and we’re happy to help.”

HRSD employees met at Sleepy Hole Park to collect trash, clear debris and add five loads of mulch to the shoreline buffer. That buffer is a joint effort between Parks and Recreation and the Nansemond River Preservation Alliance to reduce runoff into the river.

“This project requires a lot of hard labor, and that’s what they came to do,” said Parks and Recreation principal planner Mike Kelly. “They did a great job.”

All three parks had noticeable improvements by the afternoon, and volunteers like AECOM employee Leigh Strange hope these improvements impress park visitors.

“It’s just nice to see people out helping people,” Strange said. “When people come out and visit the parks and they see they are well taken care of, I think it makes some people want to pick up after themselves.”

Others like HRSD employee Christene Mitchell just enjoy getting out of the office and doing some good in the process.

“We are out here doing something for the community on a day we would normally be working,” Mitchell said. “It’s a great way to spend a Friday.”

A skunk that later tested positive for rabies tangled with a dog in Chuckatuck on Thursday, causing Virginia Department of... read more