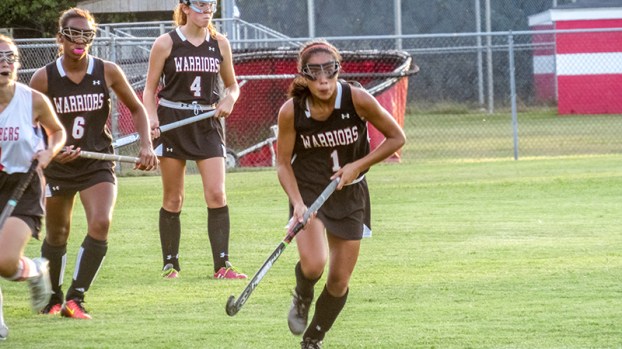 Sarah Rhiel had a goal and an assist for the Lady Warriors in their win over Deep Creek High School.

Nansemond River went on the road Thursday to defeat Deep Creek. It is the first road win for the Lady Warriors this season. It has been tough getting a rhythm and getting games played this fall for field hockey due to weather. However, Lady Warriors coach Allison Dize has been OK with their improving play.

“From game one until now, we have shown improvement,” Dize said. “The two losses we started off the season with weren’t against bad teams. We have a challenging schedule this year, and as long we continue to show improvement, we will reach our goal of being in the playoffs.”

Dize mentioned the difficulty of trying to get into a rhythm without being able to play any games or practice. Even the day after rain most times, Nansemond River’s field isn’t playable due to the water it holds. The Lady Warriors try their best to focus on the mental aspect of things when they aren’t able to physically practice or play.

“We talk about the game a lot,” Dize said. “We also talk a lot about expectations of our program. We want to have a good mentality stepping on the field when we do get a chance to. It is all about bringing and sustaining the competitive edge.”

Against Deep Creek, the Lady Warriors did a good job connecting passes and getting the ball down the field. Offensively, Dize wants her team to be a bit more assertive when inside the circle.

“Right now, we are a little timid going to the ball,” she said. “If we get a bit more assertive wanting to win every ball, we will be fine.”

“We improved and learned a lot from our last game and played better,” senior Ashlyn Rogers said. “We’ve been moving people around the field and have been finding what works best for us. Against Deep Creek, we played a smooth game and we started to move as a unit a lot more.”