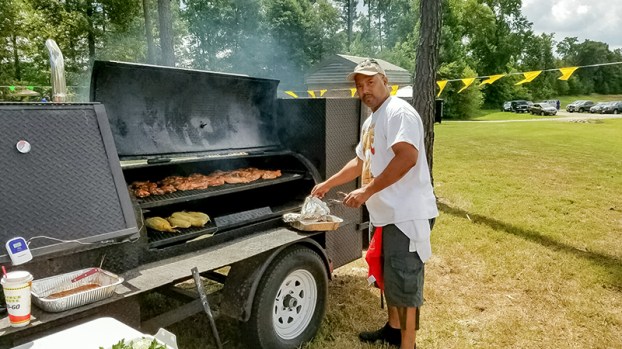 Danny Pringle Jr.’s meat stacked up on top in a recent barbecue competition where he placed in three of the four categories.

The Driver resident is a native of Houston, Texas, and grew up learning how to barbecue from his family.

“I picked up barbecuing from my uncles and my dad,” he said. “I took the stuff they taught me and just mastered it.”

Pringle has been in the U.S. Navy for 17 years and has been in Hampton Roads for about 13 years. He’s a member of Arabia Temple No. 12 in Portsmouth, which is how he got into the barbecue competition, the second annual Desert of Virginia Pit Master BBQ Competition, held in August in Caroline County.

Pringle won the brisket category at the competition and placed second with his chicken and his pork. He also entered the ribs category but didn’t place.

It was little surprise to anyone besides Pringle himself that he won the brisket category.

“A lot of people in the temple know me for cooking brisket,” he said. “I’m pretty darn good at making a good brisket.”

At first, Pringle said, he was only going to do the brisket and ribs categories. But then he wound up doing all four.

“I wasn’t for sure on my own skills with doing the chicken and pork,” he said. “Down in Texas, we don’t do pulled pork. That’s kind of a North Carolina/Virginia-type thing.”

Cooking outside in a field, using the tailgate of his truck as a table, Pringle used mesquite and apple wood to smoke his meat. He seasoned his meat with garlic pepper and Tony Chachere’s Creole seasoning — and a little extra something.

“I put love in it,” he said. “I cook it the way I know how I would want to taste meat. Just the ability to do different things with meat is phenomenal.”

Pringle said he felt good about his performance, especially when he realized the first-place winner in most of the categories was an entire team of cooks that does these competitions regularly.

“I’m a one-man army competing against a team,” he said. Winning in the brisket category “brought joy to me,” he said.

“Next year, I’m coming after the grand champion,” he said.