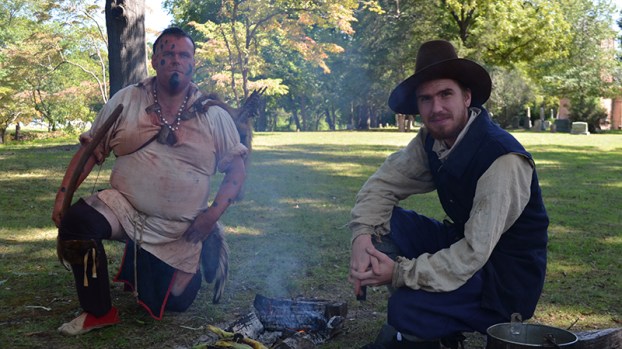 Sitting by the fire during the 17th-century living history event held at Historic St. Luke’s Church on Saturday are Sean Edwards and Andrew Rowand, both with Henricus Historical Park in Chester, Va.

Historic St. Luke’s Church in Smithfield successfully delivered the sounds, smells and sights of 17th-century living to visitors on Saturday.

The church held its living history event to showcase the trappings of the time period and offer lessons on religious history. Visitors from across Hampton Roads and beyond spoke with historical actors, toured the property and learned what’s changed and what’s stayed the same at the church during more than 300 years of its history.

“It’s very cool to see the 17th-century ways they prepared food, fought and did iron work,” said Smithfield resident Erin Matzen, who visited with 2-year-old Rebecca and 4-year-old Matthew. “It’s nice to have it here, instead of driving 45 minutes to Jamestown.”

Children like Rebecca and Matthew were immediately drawn to the friendly colonial Spanish horse inside his pen.

Steve Edwards, trainer and instructor for Mill Swamp Indian Horses, said he wanted to raise awareness for the North Carolina wild horses that are descended from those that roamed centuries ago.

“Living history is one of the best ways to get young people interested in understanding the past,” Edwards said. “People who are skilled in old crafts and trades like this are really doing a service to demonstrate these things.”

Adam Cyphers, an actor with the Heritage Foundation, was practicing his own craft with hot metal. The seasoned blacksmith explained to visitors how his crank bellows made the fire stronger, and how metal is shaped into metal hooks and other common items.

He said that blacksmithing hasn’t changed much over time.

“You can take a modern hammer and just put it into any shop back then,” he said.

Other actors were dressed in Native American regalia or European costumes, with animal pelts and glass trinkets to explain how the groups peacefully traded for a time. Dutch raiders described to visitors how they attacked English ships and settlements.

“The people are enthusiastic, and they know what they’re talking about,” said Norfolk resident John McCarthy. “It’s a great combination.”

“Instead of just reading the books, we get to interact with the past,” Czymbor said.

Richard Cheatham was in character as Col. Joseph Bridger, a political figure in the Virginia colony long associated with – and eventually buried at – St. Luke’s. Cheatham said one of his goals as an actor was to dispel misconceptions of people of the past being different from people today.

“I like to show people today that the people before were identical to us, with the only differences being science and technology,” Cheatham said.

More than 50 visitors were at the event by Saturday afternoon, while the year before drew a total of 85 visitors for the entire day, according to Todd Balance, executive director of Historic St. Luke’s. More than fifty tickets were sold for the afternoon mead tasting, and more than 40 for the concert. He said the success of this year should lead to more actors, historians and attractions next year.

Paul D. Camp Community College is making it more convenient for those who want to receive training in order to... read more