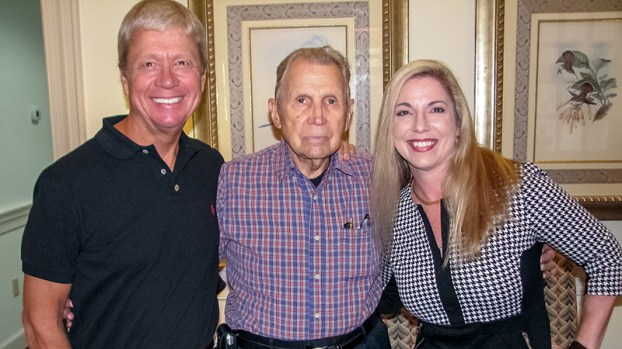 World War Ii veteran Ed Shames, one of the last surviving members of the company that inspired the “Band of Brothers” miniseries, spoke last week to the Rotary Club of Suffolk. He is pictured with Rotary members Billy Chorey Sr. and Susan Blair.

Ed Shames parachuted into France as part of the D-Day invasion in 1944, helped cripple Nazi Germany at the Battle of the Bulge and participated in the liberation of part of Europe from the grip of Hitler’s army.

But Shames, one of the last survivors of the regiment of “Band of Brothers” fame, will tell you he’s not a hero. Those guys, he says, are buried over there.

Shames grew up in Virginia Beach and still lives there today with his wife of nearly 72 years, Ida. He spoke to several dozen business and community leaders at the Rotary Club of Suffolk on Thursday.

Shames joined the U.S. Army in 1942. What led him to then join an experimental parachute regiment was a mix of adventure-seeking and youthful hubris. He was only 19, after all.

“I wanted something different, and I thought I was a little better than the others, naturally,” he said.

Shames said the Army was calling for “nothing but the very finest of youth — top physical condition, superb mental capacity and ready to jump out of an airplane” for this new unit. “Seventy-five percent of the people who had joined the unit had never even ridden in an airplane,” he added.

The unit trained at Camp McCall near Fort Bragg. But 7,000 men had volunteered, and only 2,500 were needed.

“What they put us through, nobody today would accept it, because it was inhumane what they did,” he said.

When the training was almost complete, the unit was still over-manned, so the Army devised a way to get rid of the rest of them, Shames said. The unit was taken on a 149-mile march over the course of three and a half days, carrying as much equipment as they could carry.

“That was to weed them out to the numbers they needed to go into jump school,” Shames said.

The unit continued to train and participated in the Tennessee Maneuvers — war games, Shames called them — but Shames’ unit was sent back, because they were whipping everybody.

In September 1943, the unit was sent overseas. They trained for many months in England for the D-Day invasion.

On the night of June 5, 1944, Shames and others parachuted into France ahead of the more well known invasion on the beaches the following morning.

He would go on to participate in Operation Market Garden, as well as the Battle of the Bulge. He was among the first Americans to enter Dachau concentration camp and ended the war at Hitler’s famous “Eagle’s Nest.” He returned home in September 1945 and served in the Reserves.

He and his wife, Ida, still fight, Shames said, but they’re also “still in love.”

Shames’ experience was recorded in the book, “Airborne: The Combat Story of Ed Shames of Easy Company,” by Ian Gardner.

When he thinks back on his experience, Shames says his men were the most important part.

“I had the finest platoon of men that has ever been in the United States military,” Shames said. “I helped make them, and they helped make me. If I were considered half the soldier they were, I would be happy.”