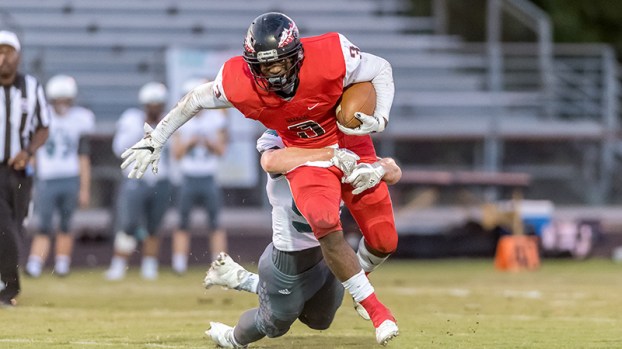 Jaquan Brayboy picks up some of his 100 yards on the ground for Nansemond River High School on Friday during the Warriors’ 47-0 win over Hickory High School. Sarah Murphy photo

The magic number for Riddick on Friday night was 291, the number of yards he contributed to the effort as the Warriors defeated Hickory High School 47-0.

Riddick went 6-for-10 with 190 yards in the air and two touchdowns and also rushed for another 101 yards and two more touchdowns.

Riddick said he especially appreciated the efforts of his offensive line.

“I’m just thankful for my line and doing what I knew they were capable of,” he said. “My confidence is going up, because I’m seeing more blitzes and different coverages with the experience I am getting.”

Even with the blowout under his team’s belt, Warriors coach David Coccoli said his team could have executed better than it did. For the Warriors to dominate a team so well without playing their best speaks to the team’s potential.

“If you can win 47-0 playing sloppy, I think it shows you have a pretty good football team,” Coccoli said. “The defense pressured the quarterback and got sacks, and the offense did well on the ground and through the air. I think we can be a pretty potent offense.”

Their highest scoring quarter came in the third, when they put up 14 points. Riddick had his longest scoring play that quarter, rushing for a 68-yard touchdown.

Jaquan Brayboy finished the game with 100 yards rushing and a first half touchdown. Malachi Middleton finished with two catches for 97 yards and a touchdown to go along with 23 yards on the ground and a rushing touchdown. After rushing for 175 yards last week, Wali Faulk added 62 yards rushing.

The Warriors will have to put this win behind them in a hurry, as they have a rivalry game coming up next week. Nansemond River travels to Lakeland High School on Friday to take on the Cavs.

“We have a good test next week, and the kids are looking forward to it,” Coccoli said. “I expect the guys to be focused.

“We just need to stay focused and limit mistakes,” Riddick said. “Lakeland is going to come out with intensity and try to get in our heads, so we have to be ready.”

A touchdown in the waning seconds of the game gave King’s Fork High School its first loss of the football... read more