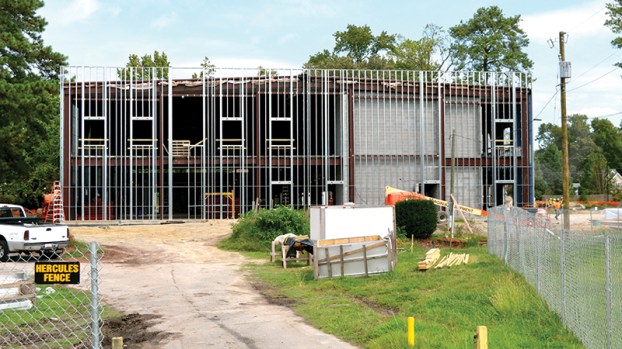 The Grove Church family life center located at 6006 Churchland Blvd. is expected to be finished by the end of December.

A new facility intended to bring Churchland-area families together is on schedule to be finished by the end of the year, officials say.

Ground was broken in March for Grove Church’s family life center at 6006 Churchland Blvd. The 23,388-square-foot facility, which is adjacent to the church on West Norfolk Road, is expected to be finished by the end of December, according to project manager Stephen Williams.

Williams said the additional 47 parking spaces for both the church and the family center are expected to be finished then, as well.

The facility is being built with a holistic approach for meeting the spiritual, physical and mental health needs of both active church members and community residents, said Dr. Melvin O. Marriner, pastor at Grove Church.

“People are excited to see the building going up,” Marriner said.

There will be a multi-purpose gymnasium with a basketball court, a stage with an upgraded sound system and a full-service commercial kitchen. Six classrooms and a conference room will be used by more than 50 Marriner Christian Academy preschool students.

In addition to the gym, a fitness center will be located on the second floor, along with a study lounge and 11 additional classrooms.

GED programs are planned for the facility, along with the church’s Students Taking Responsibility in Valuing Education program for suspended or expelled students to keep up with their SOL studies.

“We take those that are struggling for whatever reason and make sure they stay on track,” Marriner said.

The Portsmouth Police Department has committed to a program for mentoring kids that will build “a bridge of respect and support” between law enforcement and the community, Marriner said.

The church will also offer services for those in the community struggling with depression and other mental health concerns.

“We want to make sure we have individuals that are talking about mental health issues in the community,” he said.

Suffolk experienced a reported case of rabies this week, when a dog tangled with a rabid skunk in the Birch... read more