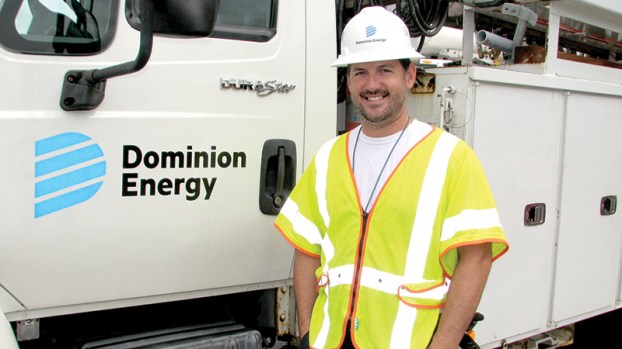 Tim Sook is one of hundreds of crew from Dominion Energy that will assist the recovery efforts from Hurricane Irma in Florida. He spent Monday afternoon making sure his truck was stocked with needed tools and supplies, as well as bottled water.

Ten linemen from the Chuckatuck office of Dominion Energy spent Monday afternoon packing their trucks and preparing to head to Florida early Tuesday.

They join about 700 staff in all from Dominion that will help restore power to millions in a state ravaged by the massive and powerful Hurricane Irma over the weekend.

“Our goal is to travel down there safely, work safe and try to get people’s lights on as quickly as we can,” said Tim Sook, a lead lineman who is one of the group from Chuckatuck leaving this week.

In all, 300 Dominion Energy workers left over the weekend. An additional 400, including line crews, tree crews, safety personnel, damage assessors and others will leave this week. 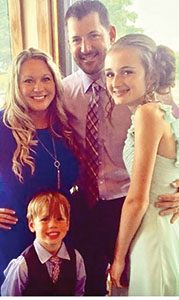 Dominion Energy lineman Tim Shook said it’s hard to leave his family — wife, Sarah, daughter, Megan and son, Maddox — to work in other states after natural disasters, but they understand the role he has. (Submitted Photo)

They will work with Duke Florida, Tampa Electric and Florida Power and Light.

Bonita Billingsley Harris, spokeswoman for Dominion Energy, said the company is part of the Southeastern Electrical Exchange. There is a long tradition in the electrical industry of mutual aid, Harris said.

“We try to help them when they’re in need, and they do the same for us,” Harris said. “They need a lot of help down there. We want to do whatever we can for our friends and neighbors to the south.”

Sook, a Western Branch resident, started working for Dominion in 2000. He went on his first mutual aid trip in 2004, after Hurricane Charley struck Florida.

He has lost count but estimated he has been on six to 10 such trips, he said.

“I went on pretty much every one except Hurricane Katrina,” he said.

He recalled that many companies came to the aid of Dominion after Hurricane Isabel struck in 2003.

“We had a lot of companies come and help us out,” he said. “We want to return the favor.”

Sook will be leaving behind his wife and children, a 14-year-old daughter and 4-year-old son. But fortunately, he knew all weekend that he would be going, so he got the opportunity to help get things squared away on the home front for his absence.

“Leaving your family is tough, but my wife and kids understand the role that I have,” he said.

Sook and his colleagues spent part of Monday going over their trucks and ensuring they have plenty of tools to finish the job. Spare tools will be scarce in Florida right now, so they want to make sure they bring their own, Sook said. He also packed a generator with gas and cases of bottled water.

They will take two days to travel to Florida and then participate in a briefing with the host utility. There, they will get their assignments.

They will likely work 14 to 16 hours a day, seven days a week for up to two weeks. If Dominion workers are needed past that, another crew will be sent.

Sook said most people are thankful when the out-of-town crews show up after a hurricane to restore their power. Folks offer everything from cake to beer, although they can’t except the beer.

Harris said the company closely monitors the forecast to ensure that enough of its own workers are in the state should the next storm head toward Virginia.

Positive trend at Port of Virginia

More good news was announced for the Port of Virginia after a record-setting August. The facilities moved 240,605 twenty-foot equivalent... read more