Students ‘gear up’ for success

Students at Lakeland and King’s Fork high schools were transfixed by a story about skydiving on Monday.

Student success expert E.J. Carrion spoke to students in the Gear Up program at both schools and used his experience of skydiving to relate to the students.

Students in the Gear Up program started in the program as seventh-graders at John F. Kennedy Middle School. They are now in the 10th grade at Lakeland and King’s Fork.

Gear Up is a program, funded by a federal grant, that aims to increase the academic performance and college preparation of students, increase the number in rigorous courses, increase knowledge of college and financial aid among students and their families, improve college readiness rates and increase college enrollment rates. 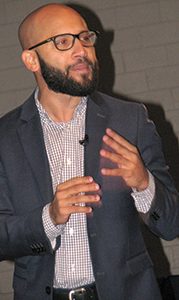 E.J. Carrion speaks at Lakeland High School Monday morning to students in the Gear Up program, a federally funded program that helps students see their options and show them the steps to get there.

“Gear Up is a federal grant aimed at increasing graduation rates and creating a college-going culture in the schools,” said Gail Barker, one of two coordinators for the program at Lakeland High School.

Barker said the program offers field trips to colleges, parent nights, college information, mentorship and more. There are about 110 students in the program.

Carrion’s appearance at the schools on Monday was part of the mentorship aspect of the program. He offered students the opportunity to sign up with his Student Success Agency, which provides agents to represent talented teens, rather than representing athletes or celebrities.

Carrion told the students his story of being raised by a single parent, getting mediocre grades and not thinking he would be able to go to college. But he got motivated toward the end of high school, improved his grades and eventually became a Gates Millennium Scholar, earning a scholarship that gave him a full ride for his higher education.

He told the students about his skydiving experience, when his best friend, who was supposed to jump with him, backed out at the last minute.

“Most people are like my best friend, and they sit back and don’t do it,” Carrion said. “It’s that fear of going all in on something you want to do.”

Carrion wrote the book, “Accelerate Your Success: How to Create a Future and Stand Out When College is Not Enough,” and founded the Student Success Agency.

“I think every student needs an advocate,” Carrion said. “It’s like a mentor in your pocket.”

Carrion said his agency is helping fulfill the mentorship component of the Gear Up grant. Lakeland was only the second school in Virginia to be able to offer the program to students.

“I’m really excited we’ve been able to pilot it,” he said. “That is extra time outside of school when kids are getting support. A lot of times a mentor can mean you need help, but an agent means you’re valuable.”

A new facility intended to bring Churchland-area families together is on schedule to be finished by the end of the... read more