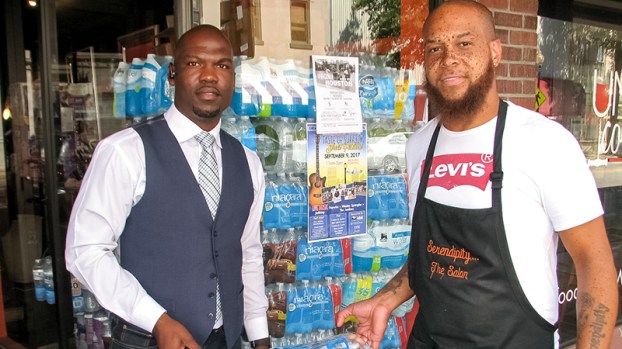 Domenick Epps and LaTroy Brinkley show off some of the water that’s been delivered to Brinkley’s salon on East Washington Street in support of hurricane victims. A group is collecting water and other supplies and plans to deliver them to victims by the end of the month.

A group of locals is collecting items for hurricane relief to be sent to wherever they are most needed.

LaTroy Brinkley said the group first began collecting items for Houston in the wake of Hurricane Harvey. But now Hurricane Irma has struck Florida, so the group will determine where the items are most needed and truck them down there later this month.

“A lot of the nonprofits have run out of items to donate because everyone’s been sending everything to Houston,” Brinkley said.

They have collected items including cases of bottled water, clothes, shoes, diapers, toilet paper and more.

Domenick Epps, who is also joining in the effort, said donations of cash, gas cards and gift cards are also welcome to help.

“They don’t fill boxes, but they do help,” he said.

Brinkley said he was motivated to help because he personally knows people affected by the flooding in Houston.

“They have some cases of water, but they need other things,” he said. “We can’t change the world, but every little bit counts.”

Jhanes in Norfolk and Shay’s Shoe Heaven in Richmond are also helping to collect items. Brinkley has many items stacked in his West Washington Street salon, and there is a sizeable stack at Epps’ office across the street, as well.

Epps said Mike Duman has lent the use of a truck to the effort. Pastor Aaron Burgess of Suffolk Church of God has also been helping.

Epps said they are expecting to leave on Sept. 23, so items should be donated by Sept. 21. Volunteers are also needed those days to help load the truck.

“If they can help people out, it would be great,” Brinkley said.

A Suffolk church group held a Sept. 11 event on Monday to recognize their faith and to honor first responders... read more