A Suffolk church group held a Sept. 11 event on Monday to recognize their faith and to honor first responders and military men and women that have made the ultimate sacrifice.

Liberty Spring Christian Church is planning regular men’s fellowship meetings, starting with a dinner on Monday. Women were also invited for this gathering of more than two dozen friends and family for comfort food and beverages.

Pastor Chris Surber said the women urged to be included to hear retired Lt. Col. Sloan Butler, a fellow church member and the guest speaker. For the 16th anniversary of the Sept. 11 attacks, Butler spoke about his own experiences in the military to highlight the bravery of service men and women, and to praise the sacrifices of those that serve God through their deeds.

“I thought it would be a good time for him to share his testimony,” Surber said. 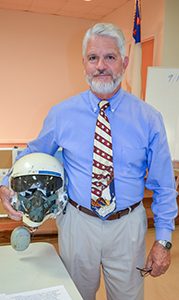 Retired Air Force Lt. Col. Sloan Butler holds the helmet that he wore during the Sept. 28, 1987 crash of a B-1 bomber. Butler spoke about the incident during a men’s fellowship meeting at Liberty Spring Christian Church on Monday.

Butler was down the street from the National Security Agency headquarters at Fort Meade, Md., when the second plane hit the World Trade Center on Sept. 11, 2001. The Bronze Star recipient thought that the headquarters would be the next target, like many others.

Rather than focus on the fear, he spoke in the church about the bravery shown by first responders that ran toward danger to save lives.

“I think about their willingness to sacrifice anything and everything for their country,” he said. “They were willing, and they are still willing, to sacrifice to do what they signed up to do.”

Butler was one of six Air Force students and instructors on board a B-1 bomber that took off from Dyess Air Force base in Texas for a six- to eight-hour simulated bombing run at 670 miles an hour and 600 feet above the ground.

The plane had turned into its second run when a bird — likely a pelican or a seagull — struck the left wing.

“If it had only gone into the engine, it probably would have been fine,” Butler said. “We could have lost one engine and made it back.”

The bird had instead gone into the wing glove and damaged electrical systems and hydraulic lines. In less than three minutes, the plane would crash.

The fire reached more than 3,000 degrees Fahrenheit, hot enough to melt titanium. That heat destroyed the controls, and the plane plunged toward the ground at a 70-degree bank. With electrical systems in failure, the compartment was in darkness as the plane shuddered and corkscrewed.

Butler recalled the calm and determination all the men displayed as the plane failed and the situation became clear.

“Everyone did what they were supposed to do, even though they knew they may not make it out,” he said.

Butler’s speech was one of several planned for the men’s fellowship group meant to encourage and challenge men in the community to live their lives according to their Christian faith and discipleship, according to Surber.

“You don’t have to fly aircrafts, run into burning buildings and you certainly don’t have to go to war to be a faithful servant,” Butler said. “You can have a positive effect on the people around you by trusting in the Lord.”

A landmark church in Chuckatuck is inviting the community to connect with history this weekend. St. John’s Episcopal Church will... read more