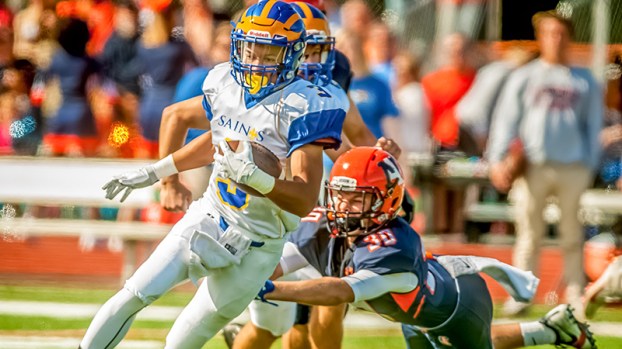 Erek Smith had 83 receiving yards for the Saints last Saturday as they took a road loss to Christchurch School. Sam Mizelle Photo

The Saints football team went to 0-3 on the season after a road loss last Saturday to Christchurch School.

Nansemond-Suffolk Academy closed its three-game road trip to start the season with the 32-27 loss to Christchurch. The Saints were disappointed with the end result, but coach Mike Biehl thought it was one of the best games he has seen his team play under his direction.

“That was the hardest my team has played for me since I’ve been at NSA,” he said. “I think we put it all out there. Anything we could give we gave, and it was just a little too late. I wanted to let them know how proud I was of their effort. We just have to execute.”

After a quarter of play, NSA was down 8-6 with a 25-yard touchdown pass from Ehron Knight to Erek Smith to put them on the board. A failed two-point conversion kept NSA down by two. In the second quarter, Christchurch put up back-to-back scores on NSA, going up 20-6 before NSA got back on the board again. A Robby Tew goal line run and a converted two-point conversion had NSA down 20-14 at the half.

In the third quarter, both offenses stalled. NSA had quality opportunities after forcing turnovers on special teams but couldn’t connect. Christchurch marched down the field into NSA territory on what looked like it was going be the only touchdown of the third quarter before an interception by NSA in the red zone. Following the turnover, NSA’s offense stalled again. Scoring after turnovers is something Biehl has been preaching to his team.

Smith had four catches for 83 yards to lead the Saints. Morris finished the game with 69 receiving yards and led the team with two touchdowns. Christchurch outgained NSA in yards 335-273.

Biehl feels like his team is on the verge of a breakthrough game. The first three games have been up and down, and Biehl feels it’s a matter of time before the Saints put together a complete game.

“I’ve been telling the kids that they are right there on the cusp,” Biehl said. “They just have to trust the direction we are going in, if we do that this team is going to be special. We just don’t want it to happen too late in the season.”

NSA will have their home opener this Friday against Isle of Wight Academy at 7 p.m.