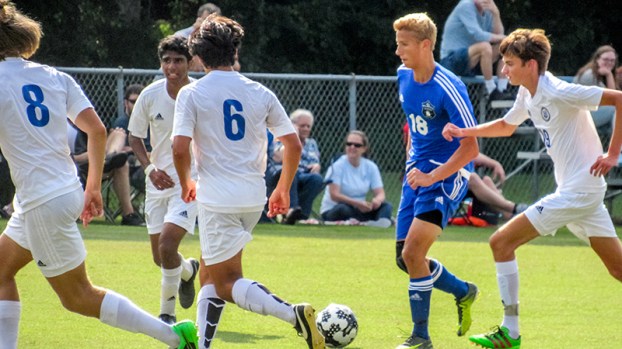 Saints pour in for win

The Saints scored 11 goals in a shutout win over Stonebridge School Monday afternoon at home.

The team effort couldn’t have been any bigger for the Saints on Monday. Four different players scored two goals, and two players each had three assists.

The win puts the Saints at 3-1, with them winning two games in a row. NSA started slow but started to play better towards the end of the first half. Saints coach Patrick Whelan was obviously happy with his team’s high scoring performance.

“It was a nice win yesterday, and I am very happy with our team’s progress at the start of the season,” Whelan said. “It was nice for us. You really have to tip your hat to Stonebridge. They have an excellent coach, and their players played with a lot of heart yesterday.”

Yes, the Saints have gotten off to a solid start to the season, but they are not satisfied. They know there is still work left to be done. NSA hasn’t started the TCIS part of the schedule yet, and that will feature some tough teams. Whelan believes he and his team have laid the right groundwork to be successful but know they will have to work extremely hard to make the best of their games in the TCIS.

“We have learned something from every game we’ve played, but we aren’t putting the cart before the horse,” he said. “We still have some very tough away fixtures to go, but our players are locked in. I’m really looking forward to watching them play out on the pitch.”

Whelan believes the key to being successful in the TCIS is being physically and mentally strong. Each game in the TCIS will be a tough one, and he knows if the Saints fall asleep for a second during any game it could cost them. NSA has an experienced group this year with nine seniors, and that can be helpful during conference play.

“Our team knows they have to play hard the entire 80-plus minutes of every game, and I’m excited to see what kind of results we can earn the rest of the way.”

The Saints football team went to 0-3 on the season after a road loss last Saturday to Christchurch School. Nansemond-Suffolk... read more