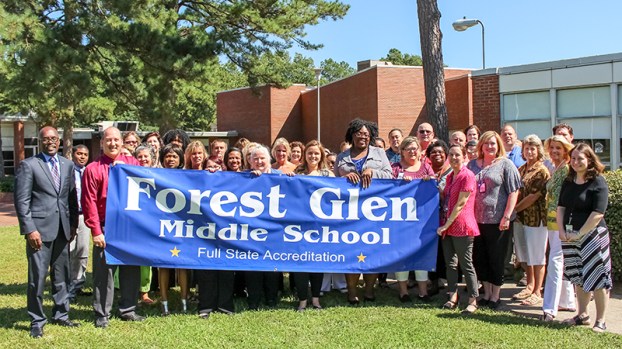 Three public schools in Suffolk were denied accreditation for this year by the Virginia Department of Education based on last year’s standardized test results.

But Nansemond Parkway Elementary School and Forest Glen Middle School are both fully accredited now, while they were only partially accredited last year.

Booker T. Washington missed benchmarks in both English and math, while Mack Benn Jr. and John F. Kennedy missed the mark in English.

In addition, Elephant’s Fork Elementary School and King’s Fork Middle School both have “to be determined” accreditation status. Division spokeswoman Bethanne Bradshaw said the school system will seek permission to reconstitute those schools. That process could include a range of changes, including restructuring a school’s governance, instructional program, staff or student population, according to the Virginia Department of Education website.

“We are hoping both schools will receive partially accredited reconstituted because of the progress made and how close they are to meeting the benchmarks,” Superintendent Dr. Deran Whitney stated in an email from Bradshaw.

Whitney said last month that the division was celebrating its improvements. Division-wide, Suffolk students improved one or two percentage points in reading, writing, social sciences and math on Standards of Learning tests this spring. The division’s pass rate declined one percentage point in science, its only decrease.

Elementary and middle schools are fully accredited when they achieve a 75-percent pass rate for English and 70 percent for social science, science and math. High schools have the same requirement in addition to a graduation rate requirement.

Whitney was at Forest Glen Middle School on Wednesday morning to present a “Full State Accreditation” banner at a staff meeting. The same will be done at Nansemond Parkway Elementary School on Sept. 27.

“We are very pleased with the progress schools are making,” Whitney stated in the email. “Teachers have worked hard and truly engaged students.”

Declining interest in hunting around the nation has resulted in an abundance of opportunities for those who still participate in... read more