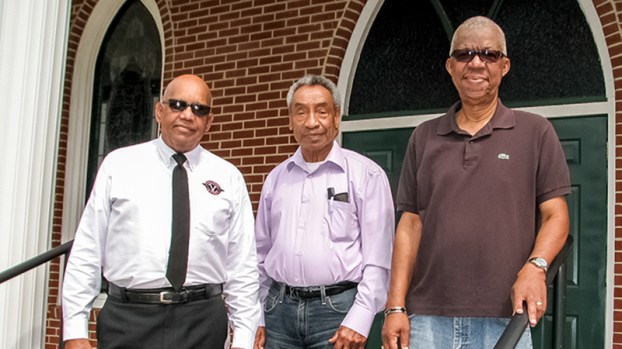 Pastor James Richardson Sr. and Deacons Joe Copeland and Eugene Boone Jr. of Zion Christian Church, along with about 100 other members of the church, are excited to celebrate the church’s official 150th anniversary this year.

A landmark church in a rural area of the city will celebrate its official 150th birthday this weekend, but in truth the church has existed for several years longer.

Zion Christian Church, located at 5200 Quaker Drive, will have a gala in Portsmouth on Saturday evening, along with a special service at 3 p.m. Sunday.

For Deacon Joe Copeland, the answer to the church’s longevity is simple.

“It’s because of God,” Copeland said. “He is the church, and really we are just the people He allows to attend it.”

Although Zion officially organized and joined the Christian Conference in 1867, it started before the Civil War in a bush shelter, built by local black families “that were free to worship in their own manner,” according to a history of the church prepared for the occasion of its 125th anniversary in 1992.

The church later moved to a log cabin on the same site, which was also used as a school for local black children. The church members showed such commitment to worshiping even without the leadership of a pastor that the Rev. Robert Holland of Holy Neck Christian Church began preaching on the first Sunday evening of every month.

Soon, the plot of land on Quaker Drive was purchased from Henry Jones “for the price of removing the dirt from the ditch bank,” the history stated. The first official pastor in 1867 as the Rev. Justin Copeland. The current building was constructed in 1910 and has had several additions and renovations.

These days, the church has 103 members. It features a vibrant music ministry, including a choir, organist, drummer and three guitar players.

“We also have some young children that are trying to learn to beat the drums,” Copeland said.

It also conducts outreach beyond its size, ministering to residents of local nursing homes and those who are incarcerated. The church also assists many who ask for help.

But the church still holds onto the traditions it believes in, including Sunday school and Communion. The deacons noted some more modern churches have allowed those traditions to fall by the wayside.

Richardson said the church, with God’s help, has survived because of the dedication of its members.

“You have people coming here for years that have been very dedicated and faithful,” Richardson said. “There’s a lot of love in this church. This church has been through some struggles, but God allowed it to hang on.”

UPDATED 6 p.m.: All lanes have reopened. Earlier: An overturned dump truck has caused lane closures in the 5500 block... read more