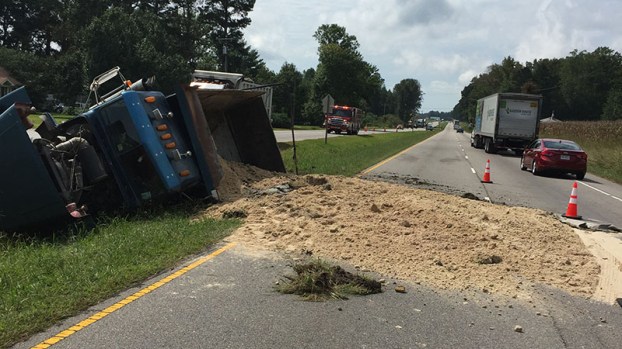 A dump truck overturned on Holland Road Thursday afternoon, temporarily closing all lanes in the 5500 block.

UPDATED 6 p.m.: All lanes have reopened.

The crash happened at 12:55 p.m. near Pioneer Road. All lanes in both directions were initially closed.

Preliminary investigation found the dump truck, loaded with sand and dirt, overturned in the median and spilled its contents onto the westbound lanes. The driver was not injured and was charged with reckless driving — failure to maintain control.

Traffic was shut down periodically as crews responded to clear the sand and dirt from the roadway. Two heavy-duty wreckers also responded to remove the dump truck.