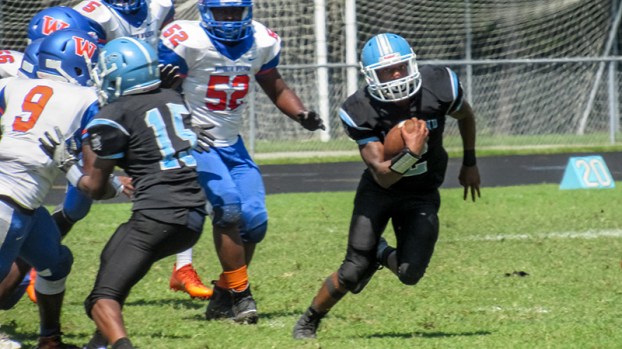 Tyriq Rawlings hits the outside hole for the Cavs against Woodrow Wilson during a prior game. Lakeland High School will take on Nansemond River High School at home at 7 p.m. Friday.

Game three for the Warriors and Cavs will be exciting, as the two rivals meet up.

Intensity will be high, tempers may flare and crowds will cheer Friday night at Lakeland.  The Cavs and Warriors will meet for the first time this season. Last year, Nansemond River escaped the Cavs with a 27-24 win, and the Warriors have won four out of the last five meetings. Nansemond River was the only team to give Lakeland a home loss last year, and this year the Cavs are looking to make up for it.

“It is a tradition we will always respect,” quarterback Tyquan Holloman said of facing NRHS. “We want to go out there and play Lakeland ball. We take a lot of pride in our home field and they were the only team to beat us here, and that’s a no-no.”

“We know we have to protect the house,” Cavs coach Kevin Knight said. “This is a real rivalry game, and we are excited.”

The Warriors are coming into the game with momentum after a 47-0 victory over Hickory High School last week. Quarterback Kori Riddick ran the show for Nansemond River. He accounted for 291 yards and four touchdowns last Friday. The Warriors’ ground game also picked up where it left off from its first game against Maury High School. Wali Faulk, Jaquan Brayboy and Riddick can all create big plays with their legs. Gerard Stringer could also return for NRHS after missing the last two games. Lakeland will have to focus on stopping the Warriors’ rushing attack for a chance to win. 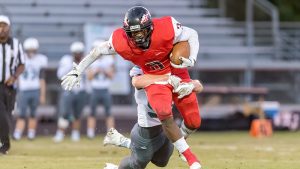 “We definitely have to stop the run,” Knight said. “They have a lot of size, but if we do what we are supposed to do and wrap up and make tackles, we should be fine.”

Nansemond River expects the Cavs to try to find ways to get in their heads; however, they just want to focus so they can execute.

“We have to stay focused so we can play our best game,” Riddick said. “It is still early in the season, and we don’t need something happening to a teammate because someone got in our head.”

Lakeland didn’t have a great showing on the road against Indian River High School as they lost 51-12 last Friday. A refreshing rivalry game at home could be exactly what the Cavs need to shake off their last game. Holloman will look to get on track after a slow game after passing for 300 yards in his first game. In the second half of the game last week, the Cavs offense didn’t produce how they had hoped.

The Warriors will certainly have to contain Holloman to enhance their chances of winning. Holloman can make plays in the pocket if he is asked to as well as with his legs. In the run game Tyriq Rawlings, Deondre Little and DeAndre Faulk will have to add to the mix.

Nansemond River will be at Lakeland at 7 p.m. Friday.

The Bulldogs are coming off of a tough loss to Western Branch High School by a late touchdown. For much of the game, the Bulldogs had control over the scoreboard. King’s Fork can get back in the win column against a Hickory team who gave up 47 points to Nansemond River last week.

Bulldogs coach Scottie Littles was able to live with the results last week, because his team played so hard. However, he also wanted to put the game behind them quickly to be ready for Hickory this week. Last year, King’s Fork won 31-14.

Offensively, the Bulldogs will continue to push the tempo for today. Darran Butts has surpassed 100 yards in each of his first two games. It could be a big game for him, as Hickory gave up 295 rushing yards.

King’s Fork will be at Hickory at 7 p.m. Friday.

NSA will have its first home game of the season Friday when the Saints take on IWA. It will be a refreshing opportunity for NSA to play in front of their home fans after being on three consecutive road stops.

Last week, NSA fell to Christchurch School 32-27. NSA coach Mike Biehl said he felt that was the best his team has played since he has been at the school. Though the Saints didn’t get the win, they hope to reach the goal of playing a complete game. Biehl feels his team is on the cusp of becoming who they really are.

“I’ve seen this team’s potential, and I know how good we can be,” Biehl said. “Even being winless, we still have what we want right in front of us. There is a lot of football left.”

NSA has had a good week of practice and knows that winning the turnover battle will be important for Friday’s game.

“We have gotten better at that each week,” Saints quarterback Robby Tew said. “Also, whenever we get a turnover, we have to score on those possessions. I’m excited to see what we’re going to do Friday night.”

NSA will be home against IWA at 7 p.m. Friday.