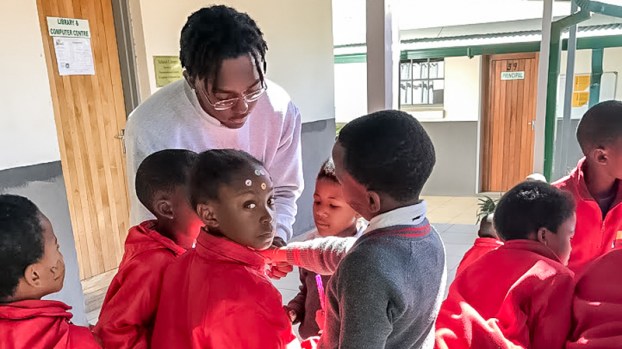 King’s Fork High School senior Lance Smith helps some children during one of his school volunteer visits while he was in Bloemfontein, South Africa.

A Suffolk high school student took time this summer to go abroad with his mother to help those in need.

King’s Fork High School senior Lance Smith joined a mission trip to Bloemfontein, South Africa with his mother, Wendy VanHosen, an assistant principal at John Yeates Middle School. VanHosen said she learned of this trip, a venture by Raleigh Heights Baptist Church of Chesapeake and others, through one of her teachers.

“I thought it would be an awesome opportunity for Lance and I,” she said.

Her 17-year-old son admitted that he was a bit nervous when he arrived in South Africa on Aug. 12 after more than 20 hours of connecting flights. He would be one of 18 volunteers representing seven different churches, with him and his mother representing Grove Church of Chesapeake. 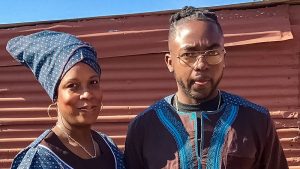 “I wasn’t sure what to expect,” Lance said. “I had never done missionary work before.”

But after spending about 10 days working day and night to help Bloemfontein citizens, he felt empowered by a job well done.

He recalled the soup he helped cook and pour into a large plastic tub. Twelve such containers were carried in the bed of a truck to various points in Bloemfontein, such as schools. Hundreds of old and young alike would come at the sound of the truck horn with dirty water bottles, coffee mugs and whatever else could hold the soup.

“It was eye-opening for me,” Lance said. “I had never seen anything like that. It felt good helping them.”

He spent whole days painting Pastor Johannes Monosi’s Healing Mission Center, and visited schools to read children’s stories to amused children. He recalled how excited the children were to have their faces painted.

“I was painting some of their faces and they would just crowd around,” he said. “It would never end.”

The locals were excited to meet black Americans for the first time, VanHosen said. They became fast-friends with her and her son, and they came to realize the similarities between their cultures.

She said what really impressed her was how infectiously positive the locals were. They sang, danced and seemed to be happy despite their circumstances.

“They were so full of joy, and they had a beautiful spirit,” VanHosen said. “They smile a lot, sing a lot and laugh a lot, but they don’t have a lot.”

That positivity left an impression on Lance as well.

“The people over there don’t have much, but they’re still happy,” he said. “I took away that you don’t need much to be happy.”

He earned more than 100 hours of community service, far surpassing the 50-hour graduation requirement. He said he plans to study engineering with added motivation from his summer experience.

“It’s motivated me to finish my education so I can help them more,” he said.

Suffolk police are seeking the public’s assistance identifying a subject in connection with counterfeit money, according to a city press... read more