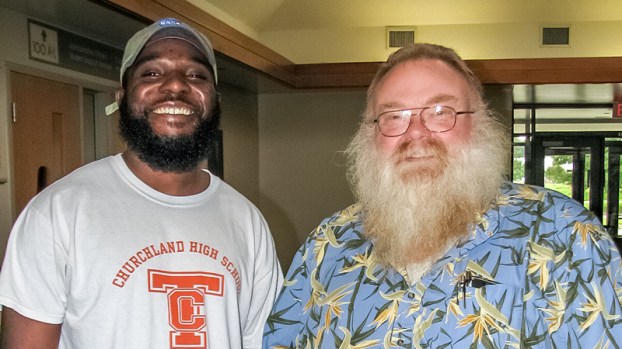 Jeremy Williams, left, and Jesse Pruden recently completed internships with NASA. Both have applied for permanent positions with the agency.

Two Suffolk residents and Paul D. Camp Community College students have applied for permanent positions with NASA after great experiences during their internships this summer.

Jeremy Williams and Jesse Pruden both said they loved the environment NASA offers and are willing to start at the bottom to get their foot in the door.

“If this leads to a job sweeping NASA’s space dust, I’ll take it,” Pruden said.

Williams, a 24-year-old 2011 graduate of Churchland High School, snagged the internship as an environmental technician this summer. He spent the season living in a dorm-type room at NASA Wallops Flight Facility on the Eastern Shore.

Williams got a new perspective on how important it is to take care of the environment during his internship.

“It was a real eye-opener,” he said. “You want to treat earth like it’s your home, because it basically is.”

He also got to meet astronaut Kay Hire, fulfilling a bucket-list item.

“It was pretty awesome,” he said. “She’s a celebrity almost there.”

Williams said the internship will help him in the future. He had planned to transfer to Hampton University and earn his degree in marine biology after he is done at Paul D. Camp, but now he is instead considering a career in environmental engineering.

Pruden said the same thing, even though he has a few years on Williams. He’s in his 50s, but he still expects the internship to have a positive effect on his future.

Pruden and a partner spent the summer mapping a steam system in a sonic and hypersonic research facility at NASA Langley Research Center.

“A lot of things had changed over the years, and they didn’t keep track,” Pruden said.

But his work helped catch NASA up on the system in the building.

“The last I heard, our drawing was being submitted to be considered as the official NASA drawing for that building,” Pruden said.

After a career in manufacturing, Pruden enjoyed the positive attidude that seems to pervade NASA.

“Everybody seems to enjoy what they’re doing and wanted to tell you about it,” he said. “It was Christmas morning every day I went in there this summer.”

Pruden also noted that, this being NASA’s 100th anniversary year, the interns got the opportunity to go to a lot of parties, celebrations and seminars they would not have had the chance to attend any other year.

Pruden also got some cool experiences. He got to walk through a hangar where astronauts practice and stood inside a wind tunnel — but not while it was running, of course.

“Aside from my wife and kids, this is the greatest thing that’s ever happened to me,” Pruden said. “I want to be over there forever.”