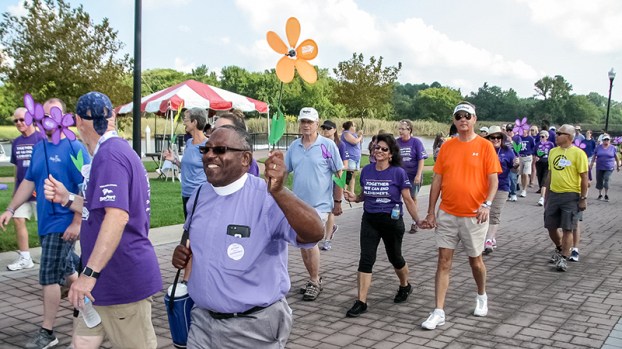 Western Tidewater Walk to End Alzheimer’s participants head out onto the path at the Constant’s Wharf Park. Hundreds of people participated in the event, carrying colorful flowers that denoted their connection to the disease.

Hundreds of people walked in the name of hope to help find a cure for the cruel disease of Alzheimer’s on Saturday.

The 2017 Western Tidewater Walk to End Alzheimer’s was held beginning at Constant’s Wharf Park. Participants walked one or three miles in celebration of the fundraising they have done during the past few months to help fight Alzheimer’s.

“Alzheimer’s is certainly not going to back down, and neither should we,” said Joe Flanagan, the master of ceremonies for the opening ceremony.

Most people at the event were there because a family member or friend has Alzheimer’s or has died from it.

The Wiggins sisters, Vivian, Elois and Gladys, were at the walk fighting for a cure for Vivian. She has been diagnosed with Alzheimer’s, and Elois and Gladys are caring for her.

“It’s pretty tough, but we live it, and we’re loving the caregiving,” Elois Wiggins said. “She may not be getting better, but we get better and we get stronger. She has victory in Christ, and that’s what’s getting us through it.”

Gino Colombara, executive director of the Alzheimer’s Association’s Southeastern Virginia Chapter, said 140,000 Virginians are currently living with Alzheimer’s. About 458,000 of their family members and friends are helping to care for them.

Lin Harbold, the chairman of the event, said she lost her mother four years ago to the dreaded disease.

“For nine years we watched her lose her motor skills, her memory and eventually her life,” Harbold said. “We can, and I truly believe we will, find an end to this disease.”

“My dad was my hero, and I’m trying to find a cure for this disease so other daughters out there will not have to lose their heroes,” she said.

Carol Roldan’s father died from Alzheimer’s in 2011 after fighting it for more than 10 years.

“I think we need more research to find a cure,” Roldan said, noting that the disease runs in families. Nearly all of her dad’s brothers also died from Alzheimer’s, she said.

Pastor Glenn Duncan, who is also a letter carrier, said he came out to support the event after one of the customers on his route was affected. Duncan said he did not think people of faith support events such as the Walk to End Alzheimer’s as well as they should.

“We’re not going to stand by idly as our clients lose loved ones and their hard-earned savings,” he said.

People at the event carried colorful flower pinwheels that they picked from a “Promise Garden” to represent their connection to Alzheimer’s disease.

Colombara said he hopes one day there will be white flowers to carry, for people who had Alzheimer’s and have been cured.

“Someday soon, we will have a sea of white flowers in our promise garden,” he said. “That is the resilience of our hope.”

A Suffolk high school student took time this summer to go abroad with his mother to help those in need.... read more